I spent a large amount of my time looking at, sighing over, and drooling upon bikes on this trip. In fact, the selection of my destinations was based largely on how cycle friendly the city was.
For the at least 6 years, I have been following the Copenhagen Cycle Chic blog and various other blogs about the beauty and general livability of living in a bike-friendly city. My health promoter’s heart can’t help but beat a little faster when I think of built environments and public spaces that have been developed in such a way that cycling becomes a feasible, practical, and easy form of transportation.
At home, I ride an old road bike to work, I ride it fast and hard, because I have a huge distance to cover, and there are a lot of points in the ride that it is stressful to be on the road, so I endeavour to “get it over with” as quickly as possible (there are some other parts of my commute that are lovely, separated, tree-lined paths, but these are the minority in my current route). So, while I have always loved the aesthetic of dutch cruisers decked out in flowers with big shiny bells and upright style, they were never practical for my purposes.
However, after this wonderfully human way of cycling upright in every outfit possible, I am totally converted. From a basic single speed, back-pedal braking bike in Amsterdam, a three-gear shiny red cruiser in Helsinki, or a classy 7 speed number in Copenhagen, I can’t remember being happier on a bike.

So, once I left the conference, the rest of my trip was  defined by cycling, and it was magical. I biked my way around Helsinki, cruised through Copenhagen, and meandered around Amsterdam. Each city had a different personality, but each was a refreshing change to the stressful North American car-centric cycling experience.

While it is not the first name that comes to mind when most people think of a cycling city, it was a terrific place to ride. Helsinki’s approach to bike culture was very diplomatic. There were a lot of bikes and a lot of infrastructure, but it was never overwhelming and aggressive. It was the sort of place that you could ride comfortably almost anywhere without stress. As someone who struggles at times with navigation, I did find that the streets were not clearly labeled for cyclists, which may have contributed to my exploration of most of the city, as I was frequently lost. 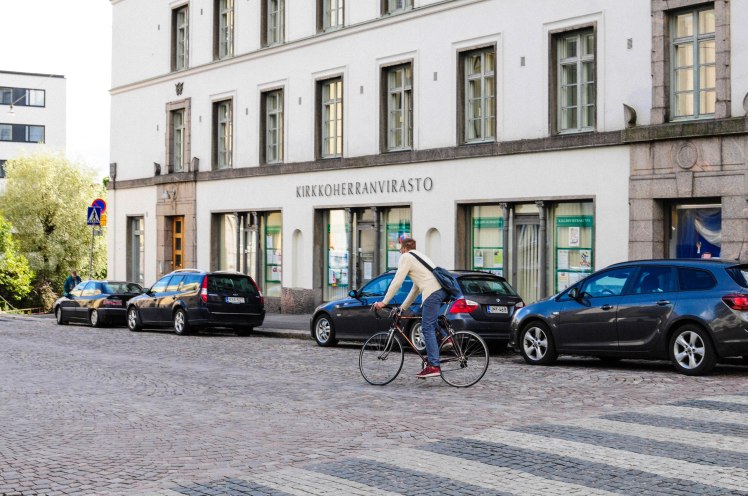 There is really no other way of saying it. Cycling in Copenhagen is an absolute dream. There is a reason why CPH is the cycling capital of the world. It is clear that this is a city that PRIORITIZED bikes in the urban planning and design, and this is reflected in both the infrastructure (which is in terrific condition, safe and separated, and completely connected) as well as behaviour (so many choose to bike over other forms of transportation).
One of the small things that I really liked was the use of a second yellow light. The lights go Green > Yellow > Red > Yellow and back to Green. It is a really small detail, but was so useful as a “get ready to go” signal. This was really helpful, as many bikes are heavy cruisers that require a good push off to get rolling again. This extra light meant that everyone was rolling at green and I think it reduced frustration of fellow cyclists waiting behind others at stoplights, creating smooth transitions. There were other details that created a really pleasant cycling experience – including foot rests and hand-hold bars at lights. I also found that it was easy to see street names from the bike so you didn’t need to get off to figure out where you were. 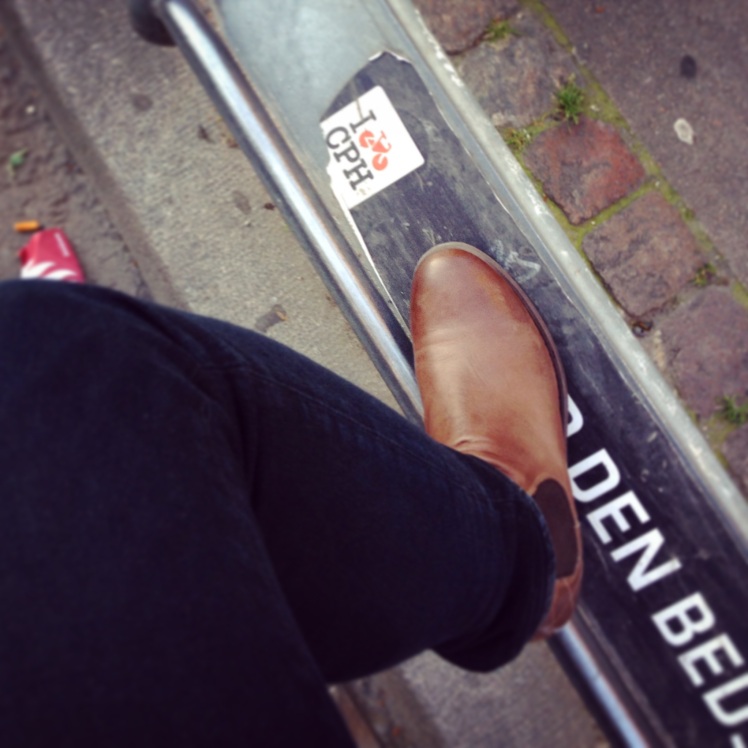 As a polite Canadian, I also enjoyed how most people followed the rules of the road to a T. Cyclists did not ride on sidewalks, cars didn’t cut off cyclists when cyclists had the right of way. People waited for the little green man to cross the streets. I think it was clear that the system has been well thought out for all road users, so there was no incentive to break the rules. This was really nice as a visitor to the town, because you knew how to predict the behaviour of most road users and I felt like I could easily blend in with the flow of traffic, and I never felt pressured to dash across a red light.
Copenhagen traffic:

Cargo bikes were everywhere! There were so many families riding around together and, even thought this is not a very good picture, I saw several cargo-bike daycares, where there would be a couple bikes filled with tots bopping around wearing matching helmets in the lady-bug-themed buckers.

It was really charming! (For a much better reflection on cargo bikes for kids and families, check out this beautiful, heartwarming story from Copenhagen Cycle Chic if you want your heart to melt all over the floor). 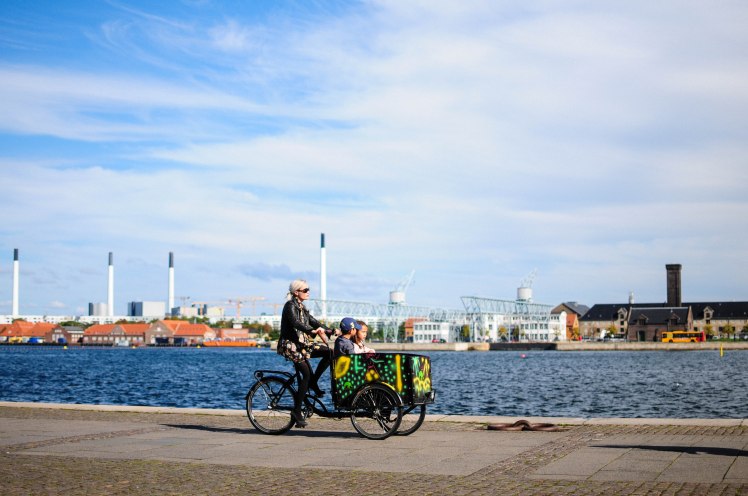 Got to ride with my beautiful friend Signe, which is probably the best way to ride.

So Copenhagan, do you wanna adopt this super-cool public health epidemiologist?!?

Amsterdam is another natural selection for someone wanting to experience a cycling culture, and, to be sure, there are A LOT of bikes in Amsterdam. So many, in fact, that at times it was completely overwhelming! This is clear if you go to any public space, like a train station. There was so many bikes all the time, you couldn’t find a place to park, and I could see how after a few Heinekin, it would be very easy to lose your bike in the horde. I kinda felt like i I was a little bit stressed that I couldn’t love every bike
One of the bike parking garages in Amsterdam (by Central station)

The system in Amsterdam seemed to have a little more anarchy embedded in it. The lights were less visible, and cyclists tended to approach the rules with a little bit more flexibility than in Copenhagen. On busy streets in the city centre, it was less clear who had the right of way, although cars would often yield to cyclists, there would be some places that cyclists would be riding in both directions, on sidewalks, and on the road. There was also the scourge of electric scooters and small vehicles using the bike lanes. Pretty much anywhere you went, if you didn’t stick to the right of the lane, you risked getting run down by an e-bike, which in some cases were wide vehicles that took up much of the lane and buzzed by with aggressive speed. (I did find the tiny little vehicles to be so adorable when they would zip down the bike paths, I can not harbor any animosity towards them in my heart. I mean, how cute!)

One thing that I found charming about cycling in Amsterdam was that there were so many people that rode around perched on the rear rack. Girls driving boys around, boys biking girls around, girls giving their besties a lift to the bar, both wearing tiny dresses and pretty heels. It was really heartwarming. 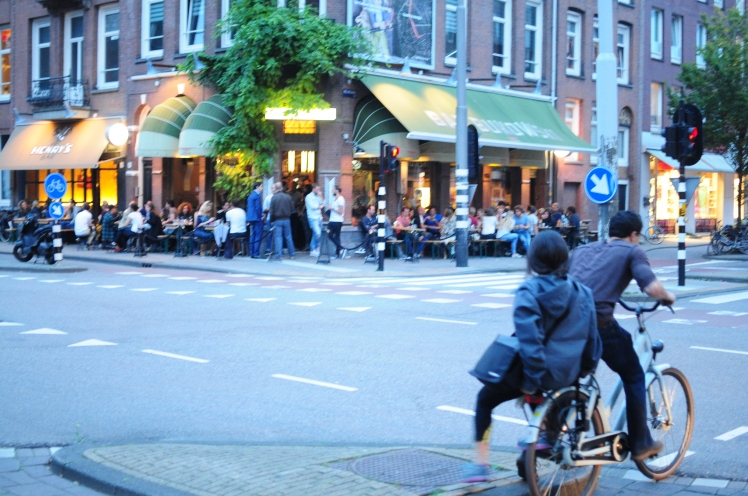 It was apparent that cycling was a community thing here, where entire families would travel together, which I couldn’t help but find wonderful. This little family was riding together, then stopped at the bridge, she hopped off her bike, gave the baby a smooch, and they headed off in separate directions.

Here are a couple more pics of bikes, specifically for all those whose hearts’ beat a little bit faster when they see pretty bikes.

My bike chilling at the Sibelius memorial, soaking in the culture.

The view from my airbnb room: 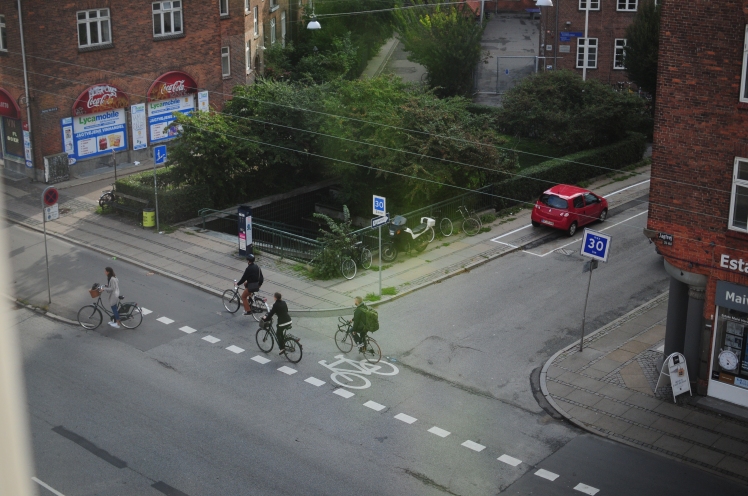 This does not happen in Canada. People BIKING to the gym!! No wonder there are so many beautifully fit people here! 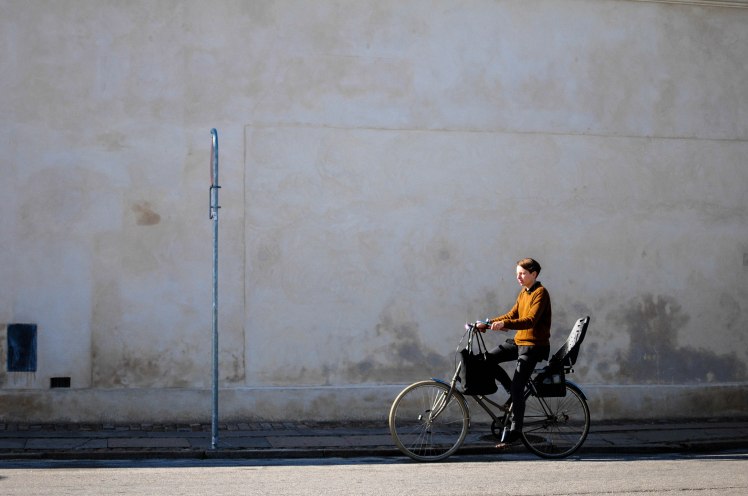 A bicycle gang of middle-aged men swarmed the square.

The cool “high-tech” bike share bikes (they have tablets!). 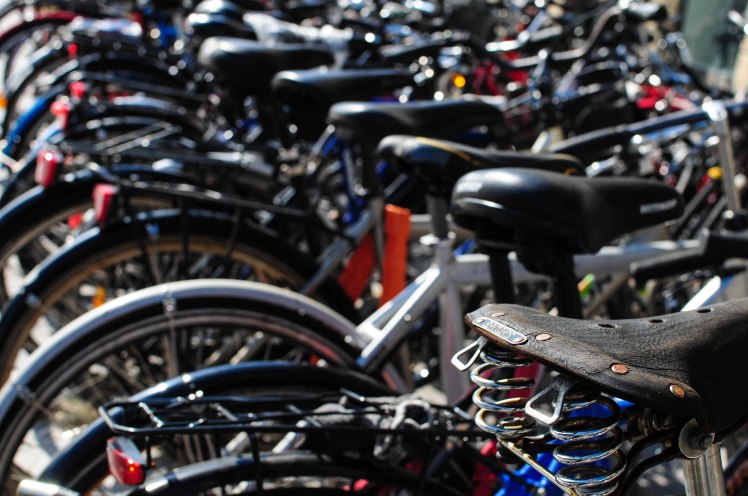 or a good classic bike basket:

And by night. What a beautiful city! 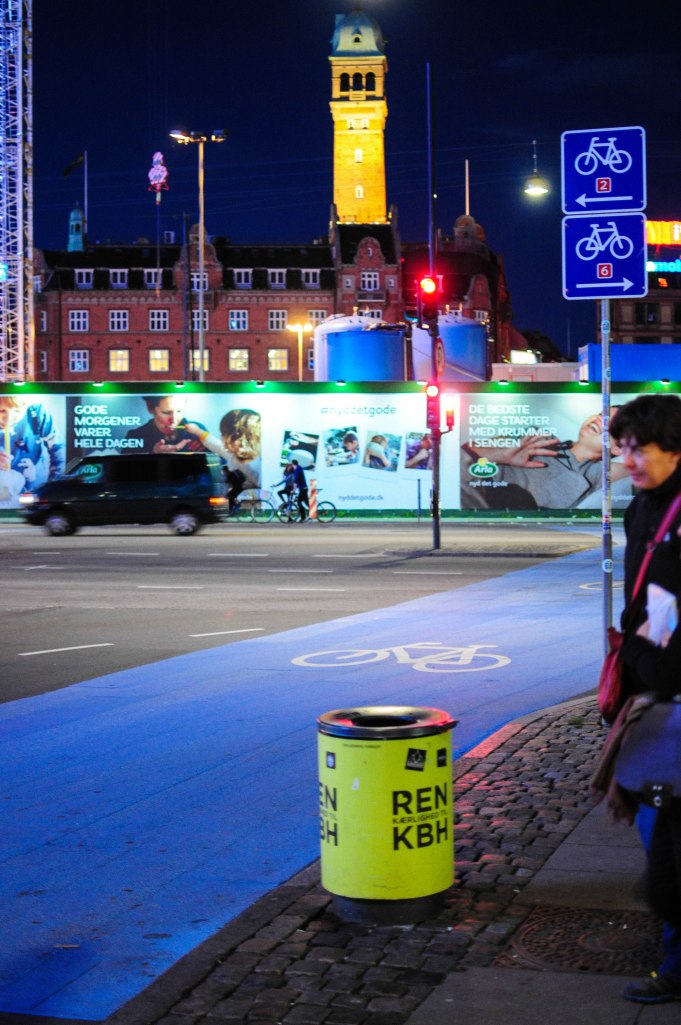 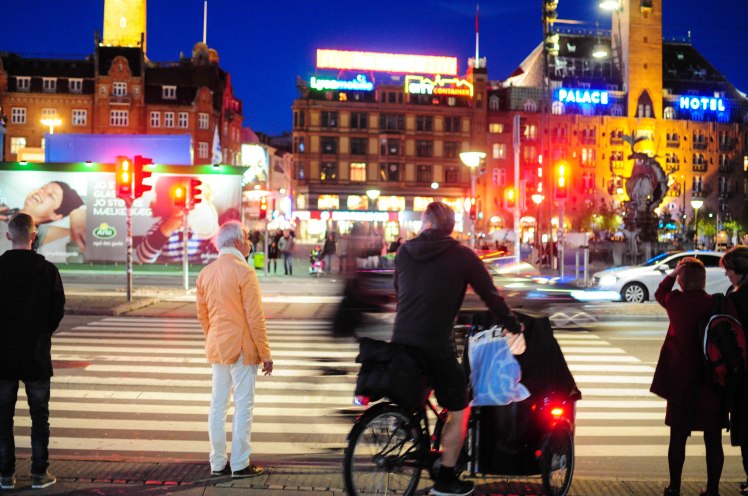 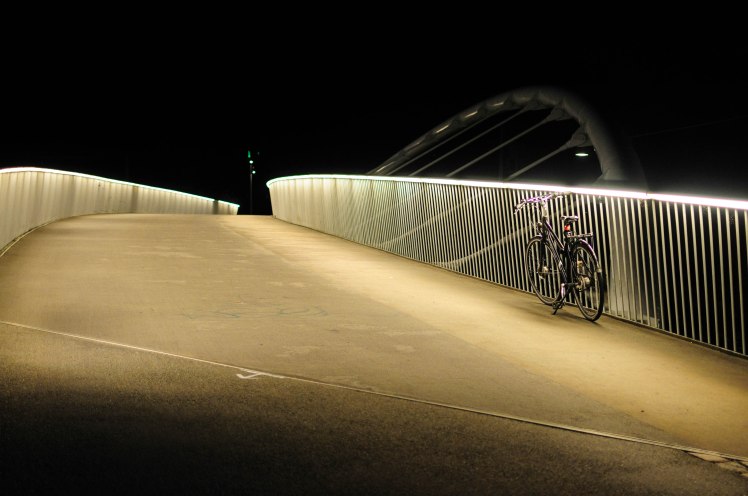 Hermes’ interactive promotion, where people would don a super beautiful scarf then get pictures taken on bikes. 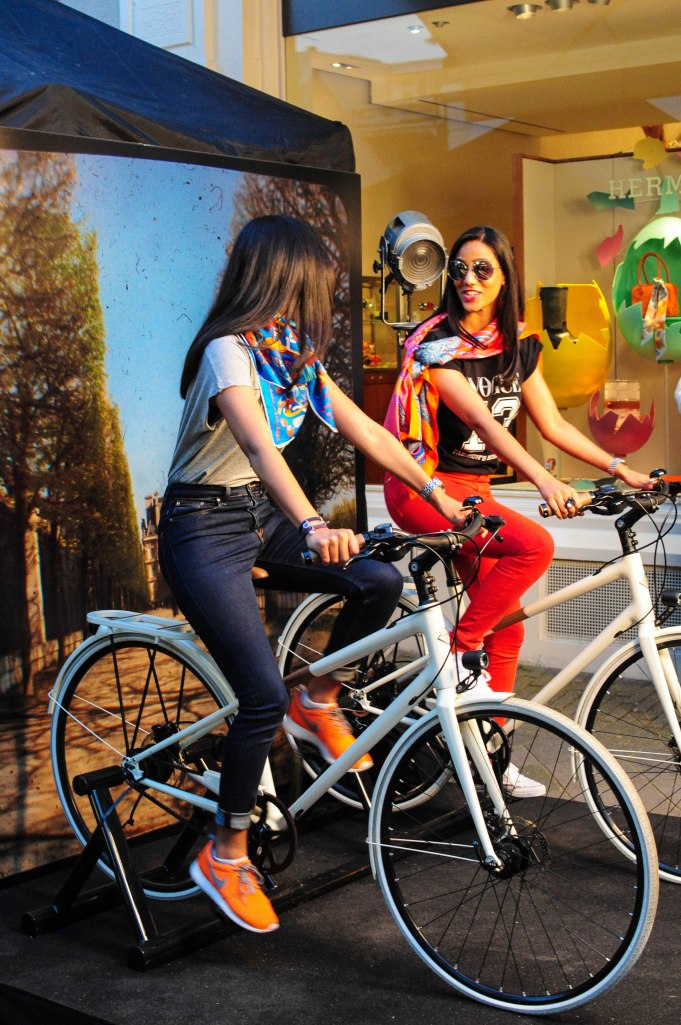 A bike babe at Vogue Fashion’s Night Out. 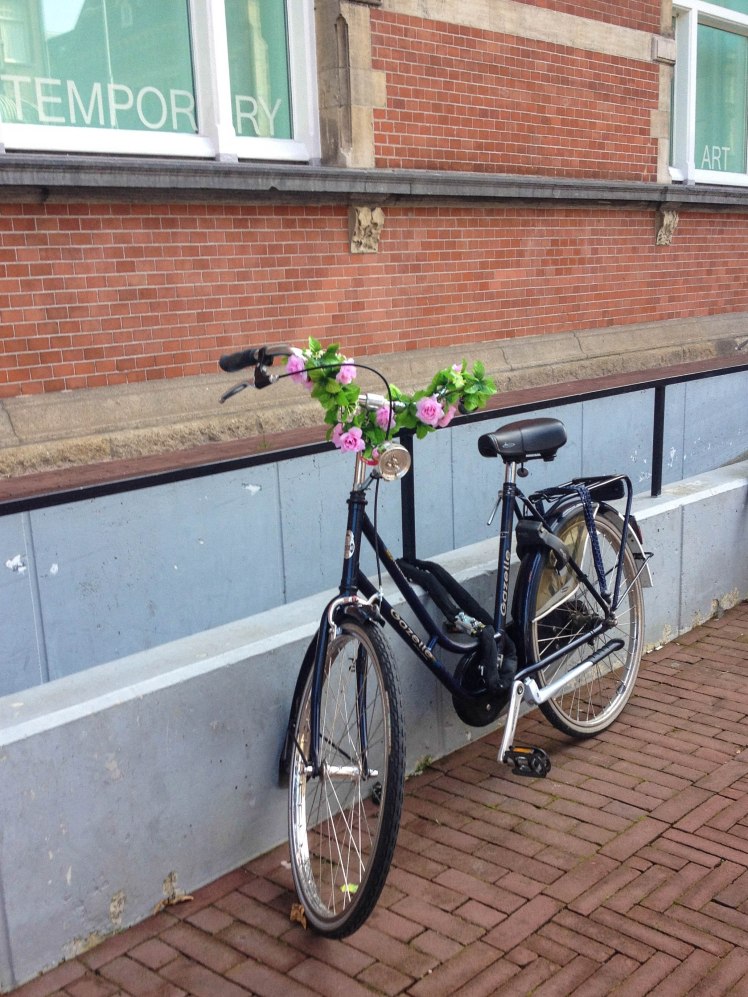 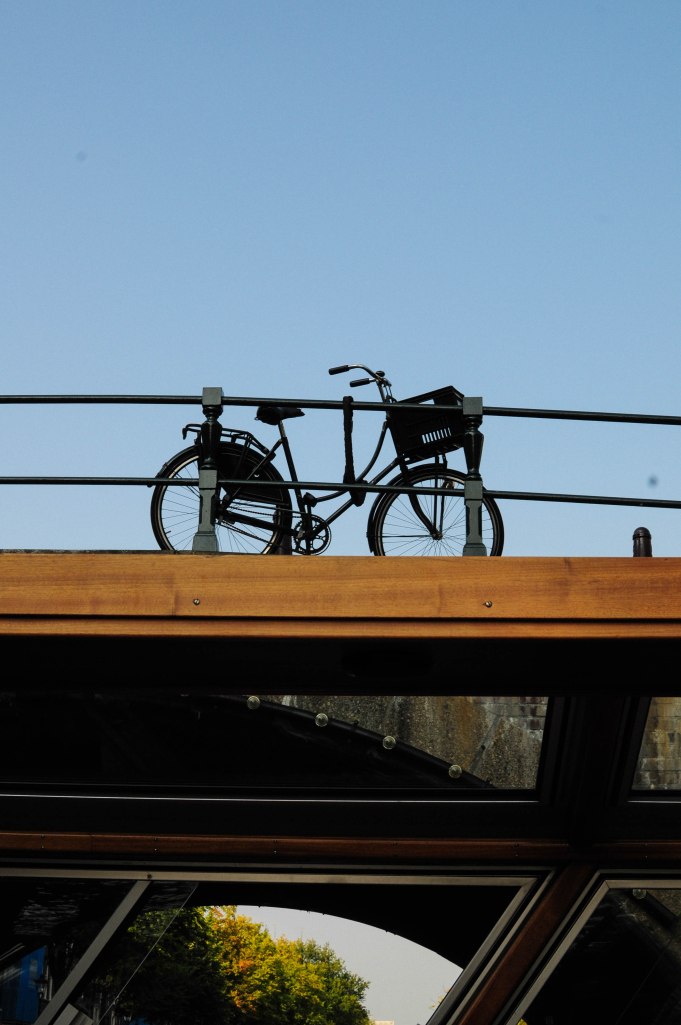 *sigh* So many beautiful bikes, so little time. Ride on!