And a scandal is born in Canada.

CBC announced that Jian Ghomeshi had been let go, and shortly thereafter, Jian released a personal “explanation” on Facebook about “the truth about what happened.” It was personal, detailed, and evoked waves of sympathy for Ghomeshi from the internet.

While I have been a long-time fan of his radio show, the reaction that I had observed was troubling. As I saw my Facebook friends “friending” Jian last night and leaping to his defense, I got more and more agitated.

It seemed that because people thought he gave insightful commentary on world events, had a smooth radio voice, and generally seemed like a “nice guy” that the allegations could be completely dismissed as unfounded.

Further, we should consider for a moment what the broader implications are for a reaction like this, particularly for those who experience violence. This public defense of Ghomeshi and unwillingness to consider that a well-known, well-liked, respectable man could do something like this contributes to the silencing and dismissal of women. Due to his well-curated public image, he has built a great deal of credibility, and his public statement seems to imply in his statement that “bitches be cray” and that this is nothing but the ramblings of a jilted lover, thus having no credibility.

I am not saying he necessarily did what has been alleged, “innocent until proven guilty” and all, but I do want to question the public reaction and challenge the assumptions that rise to the surface when scandals like this break out. Perhaps we need to collectively consider how we discuss allegations of violence. The public discourse on ‘what a shame it is that Ghomeshi’s career will be damaged’ and the like, while ignoring the victims of the alleged assaults underscore to me why so many people hesitate to report harassment, assault, and violence. 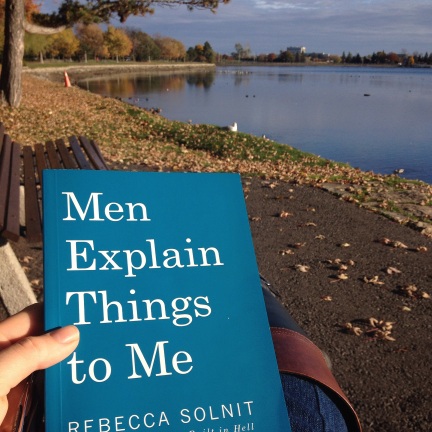 In her essay and later in her book Men Explain Things to Me, Rebecca Solnit discusses how the pervasive silencing of women contributes to the culture of violence, and how refusing to listen to the voices of women ignores the patterns of violence against women that are incessantly overlooked:

I think we would understand misogyny and violence against women even better if we looked at the abuse of power as a whole, rather than treating domestic violence separately from rape and murder and harassment and intimidation, online and at home and in the workplace and in the streets; seen together the pattern is clear. (Rebecca Solnit)

So, perhaps in the coming days, let’s hold our judgement and reflect on how we react to this type of scandal.

Update (Oct 27, 14:12): also, if you are looking for a thoughtful perspective on this story, check out Poor, persecuted pervert and of course Jezebel has an article on this as well that is worth a read.