Northcote (and Highs and Twin Forks) played at Mavericks last night in Ottawa. It is pretty rare for me to attend a concert on a Wednesday night in Ottawa, but I rustled up two pals, and we were ready to sip PBR and toe-tap with the best of them.

Highs started out the show. It was fine. There were a few lovely moments of tight harmony, particularly in the second-last song in the set, but the rest blurred together for me, in a way that suggested that they have the raw materials for a good band, but don’t quite understand their strengths and uniqueness yet. 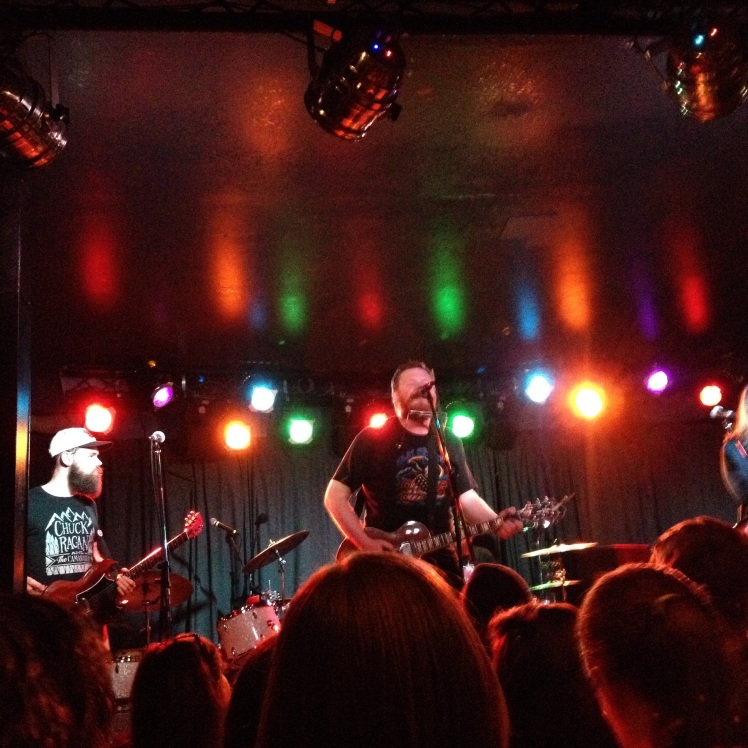 And then Northcote took the stage.

I was expecting a solo acoustic show, as Matt Goud had just been touring solo, but he was there with the full band. And it was incredible!

I have listened to his albums and dig his songwriting style and songs, but what solidified my love was his voice. His voice!! He has such an incredible vocal instrument – tremendous power, emotional range, incredible vocal control, and such richness. He is able to tell stories with his voice, drawing on some punk rock vocals to add intensity, and at other times, he paints lyrical pictures with warm, resonant tonality. He had the type of rare expansive, warm folk/soul voices that you can just crawl inside of and stay a while. Then, when I thought I couldn’t swoon more, he plays a harmonica-based lyrical rock ballad.

He had an easy stage presence, and he was charming and thoughtful in the moments between songs, acknowledging long-time fans and friends, and showing connection to and affection for Ottawa. He seamlessly led the crowd in a few sing-along moments, which are always my fav.

On top of it all, he was a super friendly guy! We had a little chat about hair cuts and beards.

If you are looking for a great live music experience, you gotta find your way to his show.

To finish the evening, Twin Forks took the stage, to the shrieking delight of former Dashboard Confessional fans. I was excited for their set, as I really liked their album, but I was not blown away by the live show, as it was lacking in the balance showcased on the album. Chris Carrabba has a great stage presence and is a good entertainer. Kelsie Baron was terrific on the mandolin and had a wonderful voice for harmonies. She also seemed to have a great deal of sensitivity to what was going on with the other members of the band and was able to perfectly augment the moment – either by boosting the energy with enthusiastic mandolin playing, or melting her voice into a slower section. She was awesome, and the rest of the band was exactly on point – the percussion and bass. HOWEVER, the final member of the group was distractedly out of place. Her voice was so shrill and loud at times, and as she was the soprano, it seared through the other layers. She did not vocally blend with the rest of the group, and it seemed like every time she would JUMP into the song with shrill aggressiveness that was so distracting. Further, she looked strangely incongruent with the chill, hipster, “just some friends having lots of fun playing music” vibe that the rest of the group embodied. She was all whitened teeth and curled hair with a Sunday school faux cardigan, circa 1999. She looked like a pageant girl who had been pulled up on stage, and she smiling, nodding, and clapping her way through the set.

In all, a great show and always great to find vibrant music events in Ottawa. Thanks Cat Facts and Le Henry for the recommendation!!

It might be love at first sight! 😍 #Jordan #Aqaba #adventuretime #travelphotographer #postcardsfromtheworld #passionpassport #dametraveler #adventureseeker #travelblogging #theglobewanderer #lovelyplanet #roamtheplanet
I don’t always know where I am going, but sometimes I find myself in simply beautiful places, and figure that enjoying the moment might be exactly what I need to do. #mylondon #prettylittlelondon #trainstations #travelgram
A majestic Nelson staircase at Somerset House. #architecture #mylondon #blackandwhite #neverstopexploring #prettylittlelondon
London is a completely different city when viewed from this perspective. Another wet, cold, and exciting adventure on the foreshore of the Thames. #mylondon #mudlarking #treasurehunting

Australian Traveller that loves to "Roam" our globe, creator of ENDLESSROAMING.COM sharing the experience through word and photography. Currently residing in my home of Newtown Sydney but hope to be back on the road late 2020. Feedback / questions are more than welcome, happy travels

Education and support for parents with neurodiverse children

Tales of inspiring wave riders. Consciously aware of our world.