Since arriving in London a few days ago, I have been swept away with the magic of this city. It is vibrant, diverse, spectacularly beautiful, and so strange. Of course, the best way to explore my new home is atop a bicycle, so on my first day in town, I hopped aboard a Boris bike (cycle share) and proceeded to get wonderfully lost (immediately heading in the opposite direction I needed to go, which I only realized after tackling a handful of monstrous hills). I ended up going in an elaborate circle, before returning exactly to where I started and hopping on the tube.

But then, I found this 90s beaut on Gumtree and knew she would be my iron lady for the next four years. She is practically perfect in every way, and I am totally smitten with her. 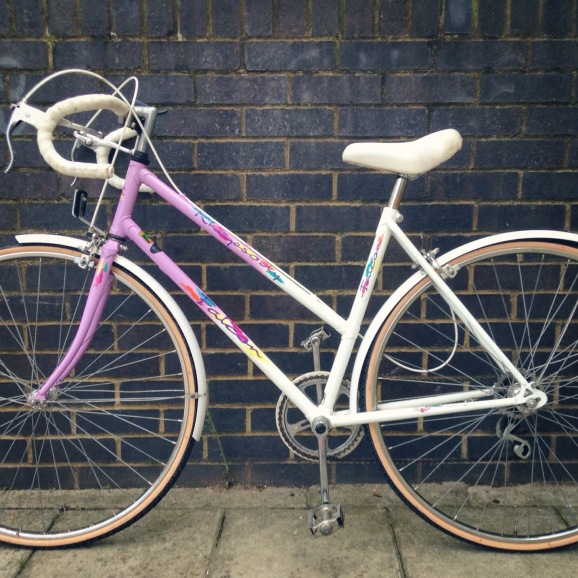 I proceeded to spend the rest of the day riding around (partly because I was moderately lost for much of the afternoon, but then partly because I was meeting up with friends for more riding!). I am so thrilled to have landed in a group of cycling friends. These two gals have oriented me to the London cycling scene in the most spectacular fashion: bringing me to Critical Mass!

Critical mass is a gathering of cyclists to “reclaim the streets” which is part demonstration for the cyclists that have lost their lives on the road over the years, but also part celebration of cycling, the city, and the community. We gathered under the Waterloo bridge on the South Bank with hundreds of other cyclists.

An hour later, we slowly rolled out, completely taking over the streets throughout central London. At various intersections, riders would drop out of the group to position themselves in front of traffic to prevent vehicles from interrupting the endless sea of cyclists (“corking”).

As expected, there were a few altercations as we wove our way through central London – frustrated drivers who did not take too kindly to being delayed on the roads by this rogue troupe of cyclists, but overwhelmingly, the emotion that filled the event was an empowering sense of joy. There were people of all ages and types riding together in this wonderful collective show of solidarity.

It was only my second day in London, so this was such an extraordinary way for me to ride through central London’s most beautiful places in a safe and heart-warming way. We crested this bridge, and this was my first glimpse of Big Ben since arriving, and I was riding along side two lovely friends, surrounded by hundreds of cyclists. I am pretty sure that moment was pure joy. 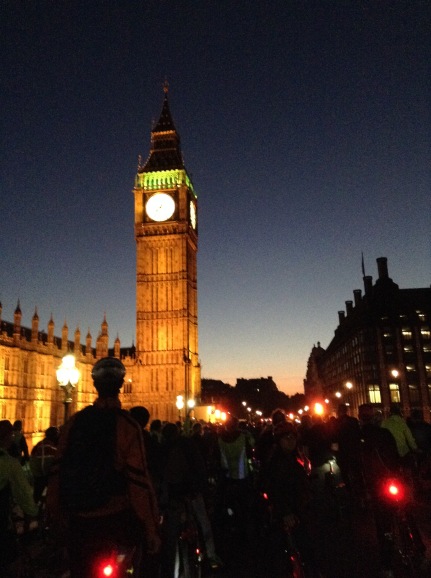 For much of the ride, we positioned ourselves near one of the riders who had rigged up a speaker system to their bikes and who were pumping sick tunes to turn the event into a rolling dance party. There was also one superb gent who had affixed a bubble machine to the back of his bike, and so we got to ride through etherial clouds of bubbles, bopping along to the music, with the biggest smiles on our faces. My experience of critical mass was that it was a  a spectacular parade of bell-ringing, cheering, and dancing cyclists celebrating the joy of riding and the confidence that comes from being part of a community of like-minded individuals.

In short, my heart grew three sizes that day.

And then there was beer and crisps. #bliss

So in short, it was the perfect day! I have a feeling I am gonna love this city a great deal.