I had decided to splash out and book the overnight ferry back to the UK. To my delight, it seems that ferry travel is not completely booked during the week, so I had a comfortable cabin to myself. After a sound sleep, I TOOK A SHOWER! ON A BOAT!? Luxury. I had a cup of coffee, and by 7am, I was back on British soil. 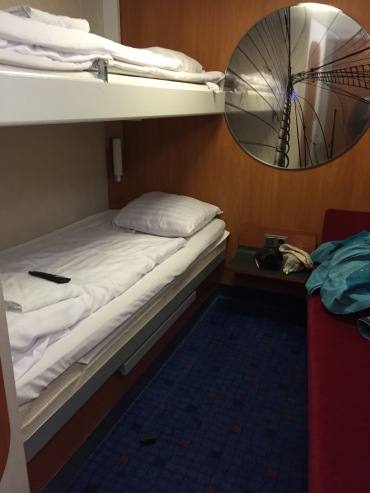 The day started with beautiful optimism. The sun was shining and it was beautiful, although I knew I had a long day ahead. There were some lovely bits of the British countryside, charming towns, lovely churches, and endless fields.

I did not anticipate the tole that the constant headwind would have on me as the day wore on. The added challenge was the fragmented infrastructure for cycling. Cycle lanes like this:

At far too many times, I found myself having to dash across multiple lanes of traffic when bike lanes abruptly ended. I also learned that Google maps (cycling directions) hates cyclists and wants the to die. Perhaps a symptom of travelling alone for the last week, I started to have long conversations with the Google maps voice.

Google: Turn right onto the A12.

Me: That doesn’t seem like a good idea. Isn’t that a multilane highway?

Google: Trust me! It will be totes fine!

After 3 miles of the most terrifying cycling, I ignored the insistence that I continue on the A12, taking the first off ramp and catching my breath.

Google: That will add 30 miles to your journey. Pleasure doing business with you.

Google: Get back on the deathy A12, there are no other options.

At that moment, I spotted another cyclist and asked if his route was also indicating that the carriage way was the suggested route. He said yes, that there was a separated bike lane, so I happily cycled along the whiz of traffic.

The next time Google suggested the A12 (because I had not died yet, despite Google’s best efforts), I naively followed the suggestion, expecting a bike lane, only to once again, had the nerve-wracking experience of pedalling furiously along the rapidly flowing traffic.

The plan was to reach Upminster, an outer borough of London, by 3pm, so I could get on the District line before rush hour. The deadline for me to cycle the 90 miles was 3pm, and despite the headwind and the frequent re-routing to avoid busy roads, I was on track. However, 25 miles out, I got my first flat of the trip. I was able to make relatively quick work of changing the tube, but knowing that I would not meet my deadline (and would therefore need to wait until 7pm to be able to take the tube), I took the opportunity to lie down in the grassy ditch and snack on figs.

While I had tried to maintain a very careful balance of calories out-cheese in, I had run out of gouda (I KNOW! CRISIS!), which meant an emergency stop at McDonalds for an Easter-themed creme egg McFlurry.

Never in the history of Transport for London has anyone been so happy to see the bold red symbol of a London bus indicating that I had made it back. With some time to kill, I stopped at the pub next to the tube station and found an appropriately named beer to celebrate, for this member of the dead pony club.

Thanks for joining me on this first Pedalling for Mental Health Adventure. I have many more adventures planned for the next year, and hope that you may be able to support mental health research along the way.

One thought on “Pedalling home”