One of the most famous fountains in the world, it was pretty cool to wish on this fountain. According to tradition, the way to ensure that you will return to Rome one day is to toss a coin over your shoulder into the fountain. Apparently, €3000/day of coins end up in the fountain, but you can feel good about tossing your money into the clear blue water, as it is used to fund a supermarket for the poor, where essential items are provided free.  Here is the whole gang, part of a HUGE crowd of people that surrounded the iconic site.

It is not every day that I hang out in a building that has been around since 126 AD. This was one of those rare days. Even though it is nearly 2000 years old, it remains the world’s largest unreinforced concrete dome. Which is totally mindboggling! The brilliance that was required to figure out how to build such a structure without the modern building equipment is completely impressive. It was also ornately decorated and each detail was exquisite. 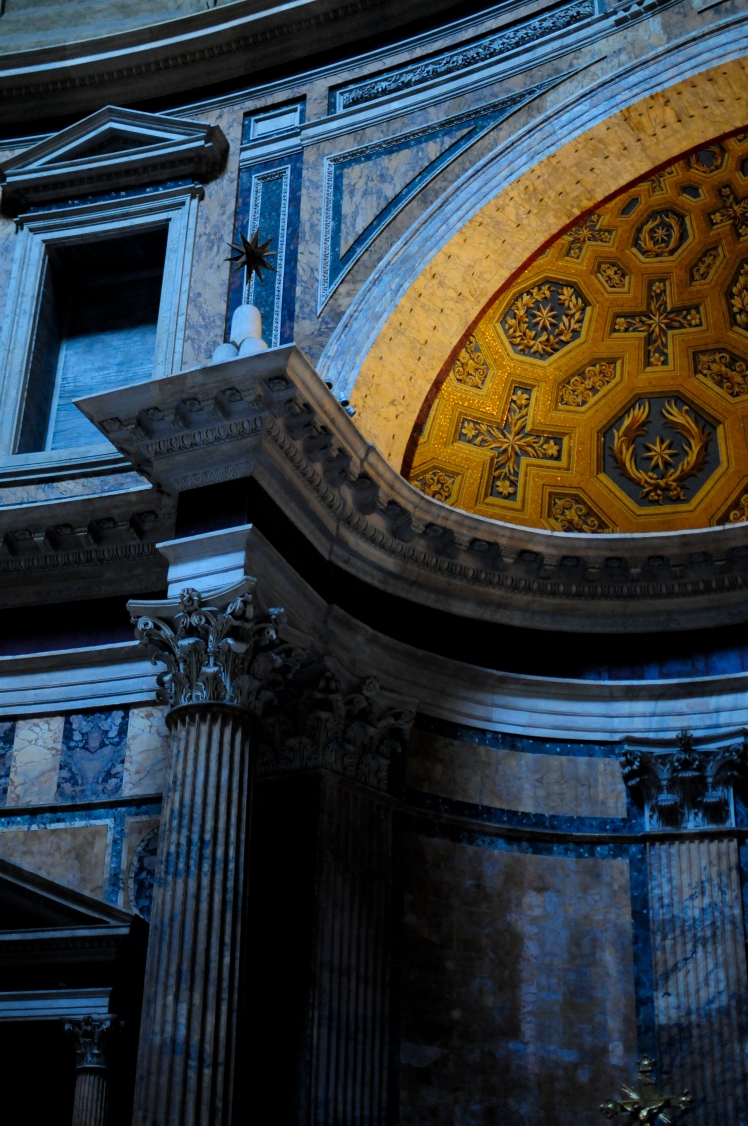 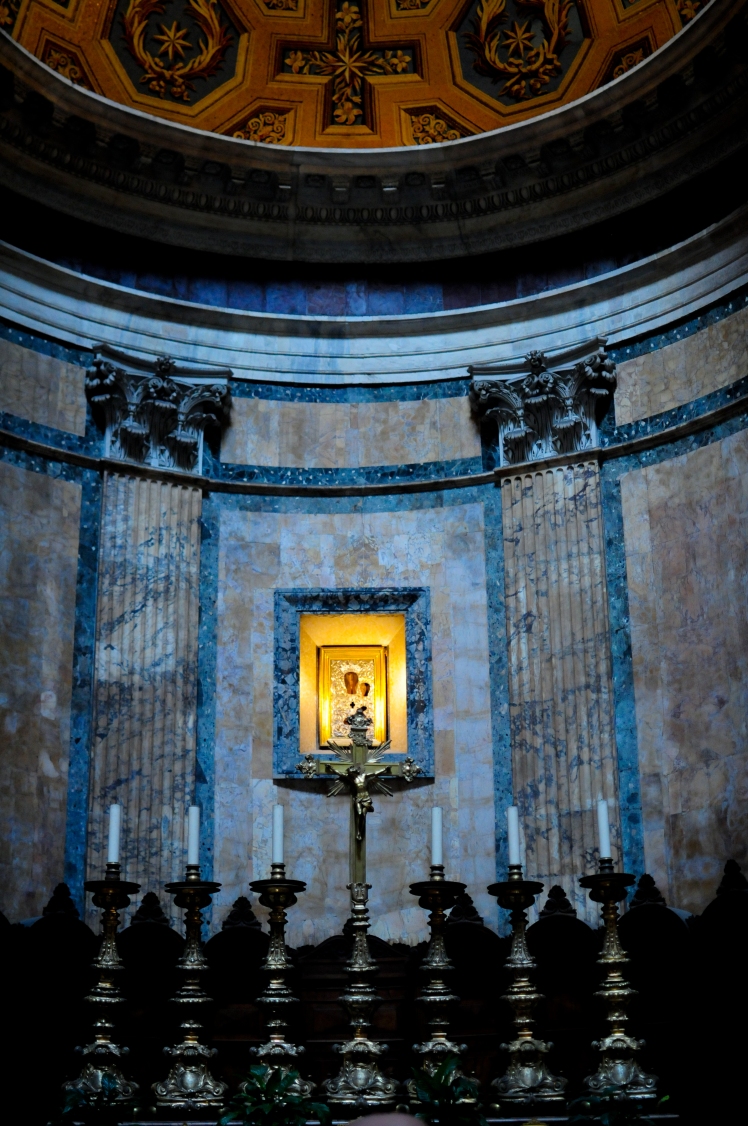 An important stop on a visit to Rome is to cross over into the Vatican to shoot the breeze with the pope. As I really wanted to see the Sistine Chapel, visiting the Vatican Museums was on the top of my to-do list. 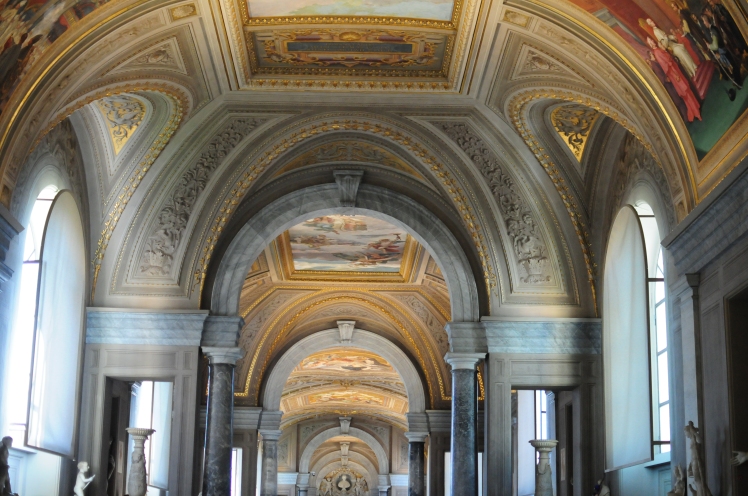 We [smartly] bought tickets in advance, which have a time for entrance, and were able to skip waiting in the long line that snaked along the walls of Vatican city. Once you enter, you wander through and endless labyrinth of buildings and rooms brimming with paintings, sculptures, and tapestry.  I could tell that I was battling a migraine, as I knew I was seeing truly exceptional art by masters the world over, but I the sense that I was trapped in the Ikea of important art. The path to get to the Sistine Chapel is 8km long, filled with important pieces. Not surprisingly, there are hundreds of people also perusing the place, so you end up find yourself funneled in that shuffling manner from room to room. While it did feel overwhelming and at times onerous, I did really enjoy some of the little treasures. My favourite room was the map room, where the walls were covered in huge paintings of the regions of Italy, decorated with regionally specific pictures.

I also really enjoyed the strange art in a hall of “lesser known/less important” sculptures. Including these gems.

All that said, the walk to get to the chapel was totally worth it. Standing below the hallowed ceiling was nothing short of breathtaking. I found a seat and spent a long time marveling at the ceiling. The genius of Michaelangelo was blatant when you looked at how he was able to capture realistic architectural details, weave in in-depth religious knowledge, and a captivating sense of colour and emotion. I had not imagined that I would one day be standing in this place. It was an extraordinary moment that I have tucked away into my heart as one of the moments that I was completely filled with awe. 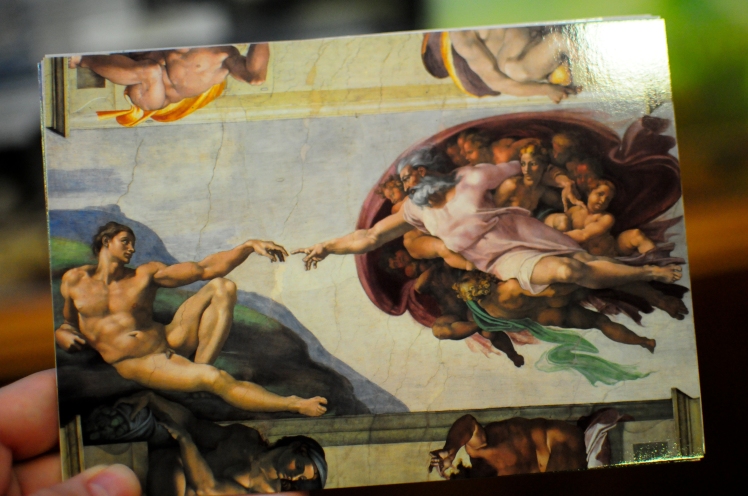 Only in Rome can you wander down the street and happen across this. I am still not sure what building it was, but we were inspecting the elaborate fountains and building when a marching band and religious parade took over the street. It was pretty great!

That’s about it, folks! Some of my favourite places in Rome.

“But what about the Colosseum?”

I was a smidge obsessed with the Colosseum, so it gets it’s own post. Stay tuned for an unseemly barrage of photos!!

One thought on “A fountain, some art, and a few buildings: Highlights from Rome”