This happens with embarrassing frequency: I lose track of days/weeks. I show up at hostels a day early, book hotels for a day later than I need them, or I will open my planner to discover that I have an extra weekend that I didn’t realize I had!

Obviously, this realization is a rather joyous one, even though it derailed any hopes of early afternoon productivity. I immediately lept into adventure planning mode! I have all the raw materials needed for a fun adventure – a bike, a bivy, some gear, and unquenching desire to explore.

Also, Sweden has an amazing “freedom to roam” laws, meaning you have the right to roam the Swedish countryside in peace. This is incredible and in contrast to many countries where such wanderings are forbidden in a range of access/trespassing laws. In Sweden, you are allowed to access any land (except private residences, their immediate surroundings, and cultivated land). You are able to put up a tent AND allowed to light a campfire! Things that are also permitted include collecting mushrooms, berries, and flowers, or catching fish on the coast or in a number of the lakes. (Source: The Swedish Environmental Protection Agency)

I have not yet adjusted to the European/UK pattern of holidays and my aforementioned penchant for losing days means I keep being surprised by holidays (or “red days” as they are called in Sweden). However, my Canadian roots run deep, and the sacred May 2-4 weekend is emblazoned into my heart as the first weekend of the “summer.” Meaning it is the weekend when all city dwellers load cars with unwieldy coolers filled with beer and the raw materials for making s’mores and head out into the campgrounds of Ontario in order to possibly freeze/get carried off by black flies/have a grand time. The discovery that I had a free weekend AND it was May 2-4 gave me no choice but to plan a cycle tour/camping trip!

I had initially mapped out an ambitious route, but after an after-work event on Friday got a little more riotous than I expected (free prosecco. need I say more?), I scaled back on my plans. Instead of heading out for marathon distances, I messaged a friend and within a few hours, we had essentials loaded on our bikes and were setting off in search of a slice of nature. 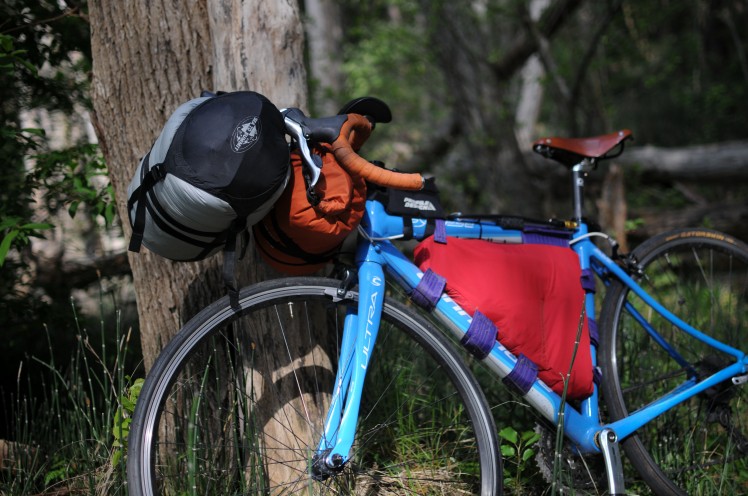 I have not quite finished sewing my bike packing kit (I am planning to make a rear hoster for a drybag), so my makeshift solution was to strap two dry bags to the front and utilize the amazing frame bag made by my sis! While some of my camping essentials are still stranded in London, Nika was able to fill the gaps (like a stove & pot), so this is my non-exhaustive packing list:

I also had a small backpack for my wallet and camera (and later to shove in a few groceries). Ideally, adding a rear bag to this setup will eliminate the need for me to carry stuff on my back.

We were both pretty keen to hit the road! 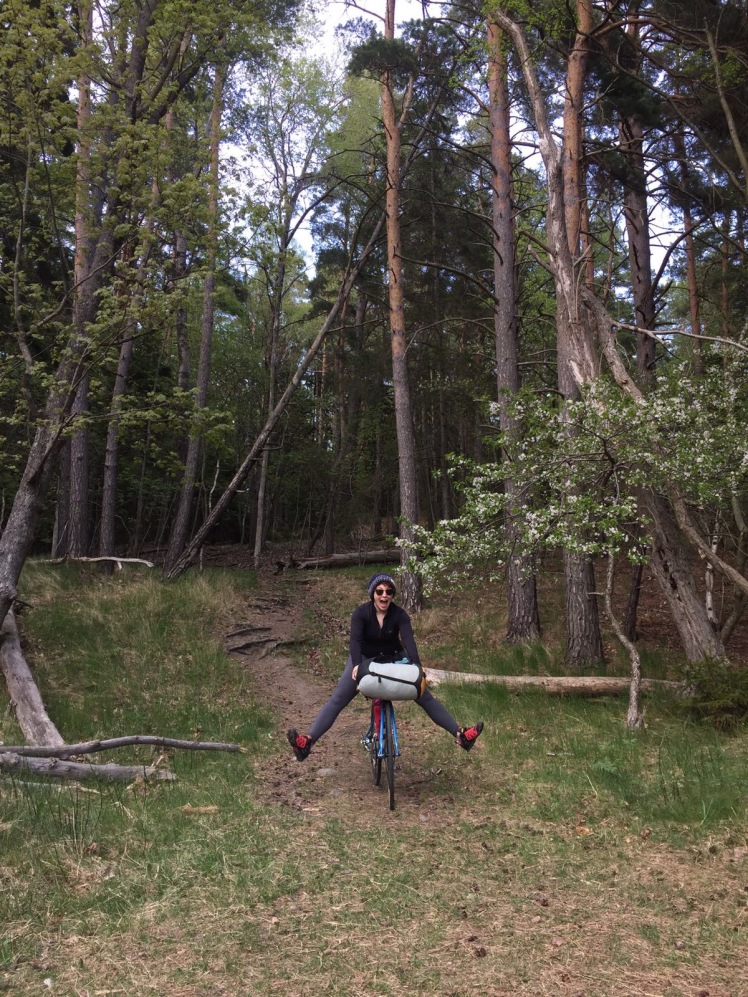 We rode around 20km to find this beautiful spot on Ekerö, which had our own secluded piece of forest, shore, complete with a half-sunken wooden boat for extra ambiance. 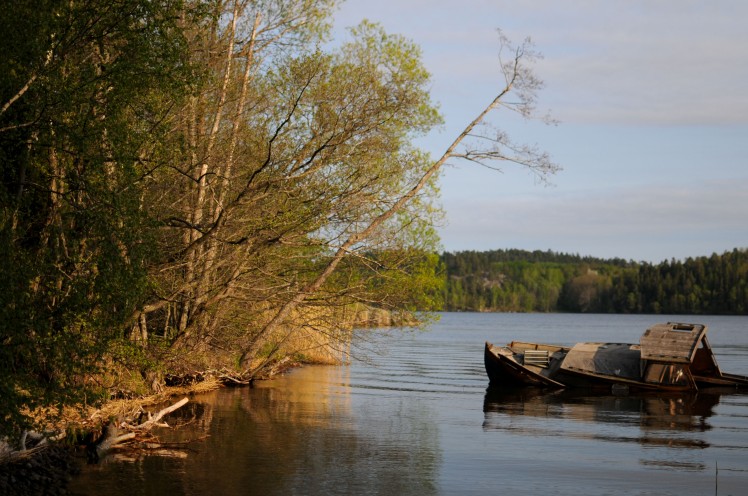 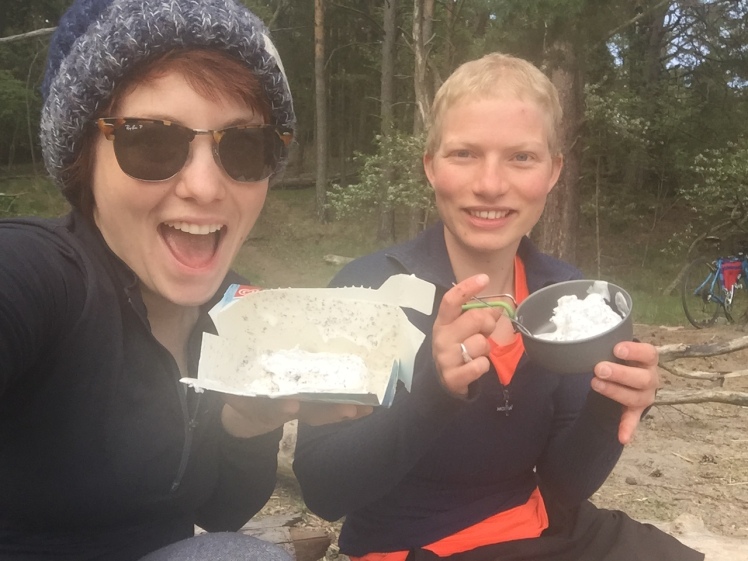 And a few moments of tranquil time to sit, and think, and soak in the sound of the water lapping at the shore. 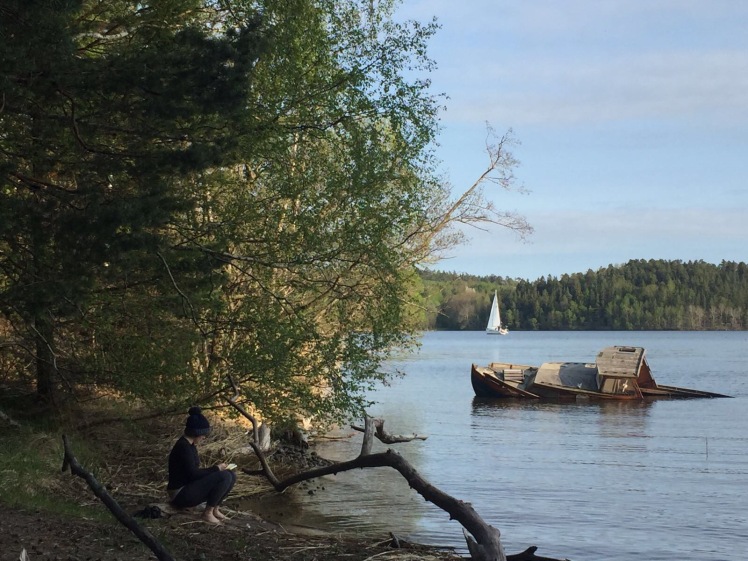 And a little harmonica. I recently decided that the uke is far to large for bike touring, so I have switched to the harmonica. I am making slow progress expanding my repertoire. (which I am sure the poor sods which share an apartment wall would attest to). I think many of the songs I play are vaguely recognizable… 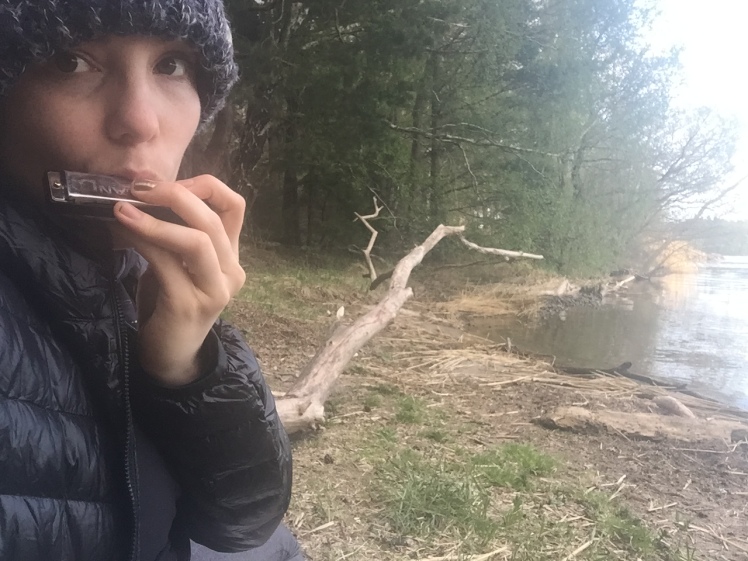 Dinner time! We enjoyed a hearty dinner of some sort of lentil/barley/pumpkin seeds/mushroom concoction which was a delight. The addition of soy dogs made it practically gourmet! 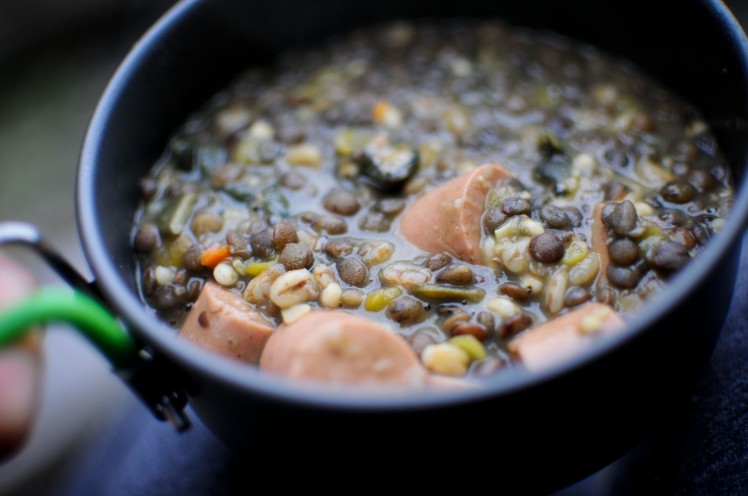 With a bottle of Redemption, a folkol (low alcohol beer) which had been chilling in our spare tire sea fridge. 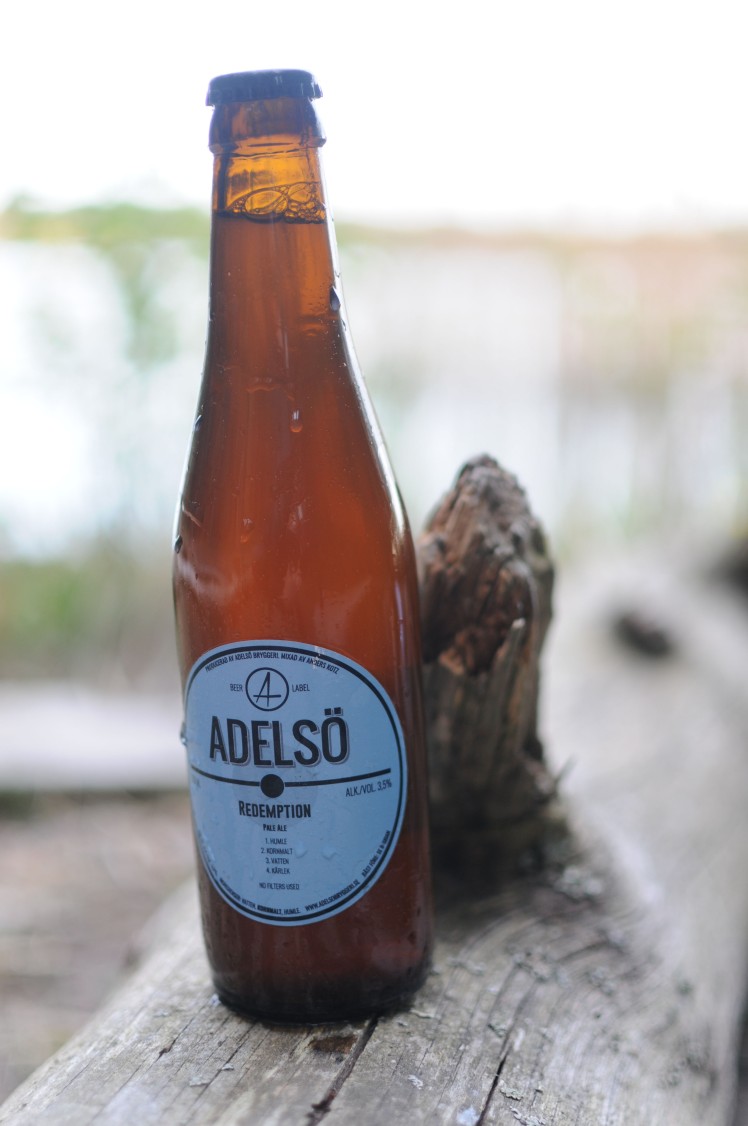 The site we chose had an abundance of dry wood, so it was clear that my campfire goals might be possible. For someone who has spent a lot of time camping/hiking, I can probably count on my hands the number of fires I have been solely responsible for. I have often camped with other competent woodsmen/women and on my solo trips, there is usually no fires allowed. Even though Nika happens to be one of these exceptionally competent firemasters, she allowed me to take charge of the fire and gave me some really helpful tips. Soon we had a MAGNIFICANT fire! 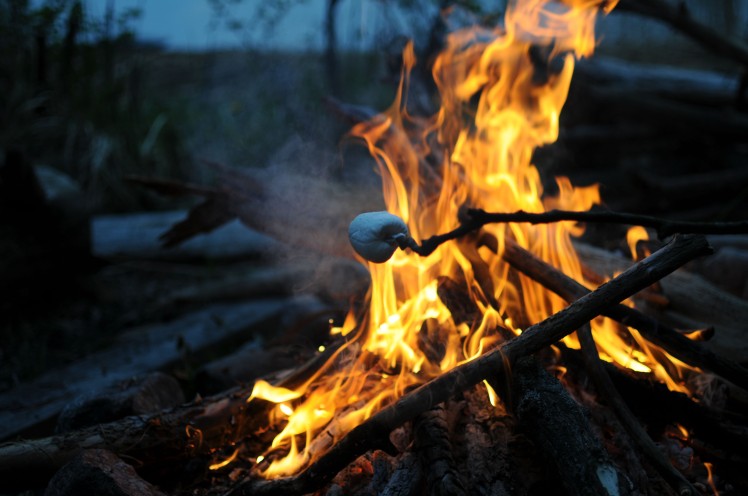 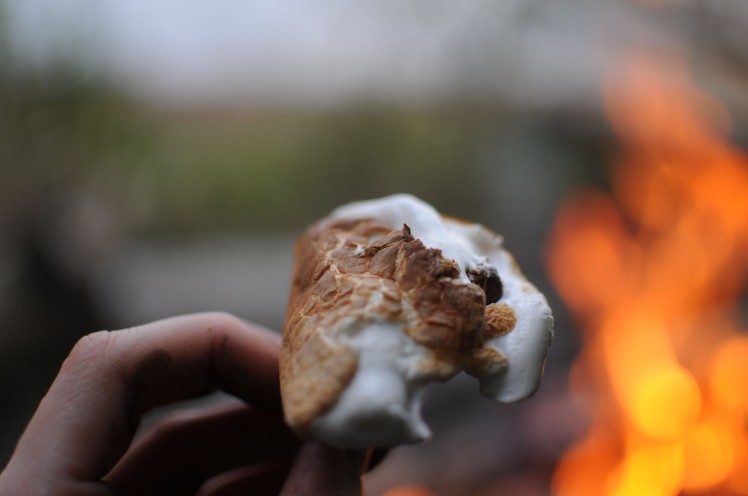 I did not bring any sort of camp shoes, so within minutes, I was in my natural dirt squirrel state. 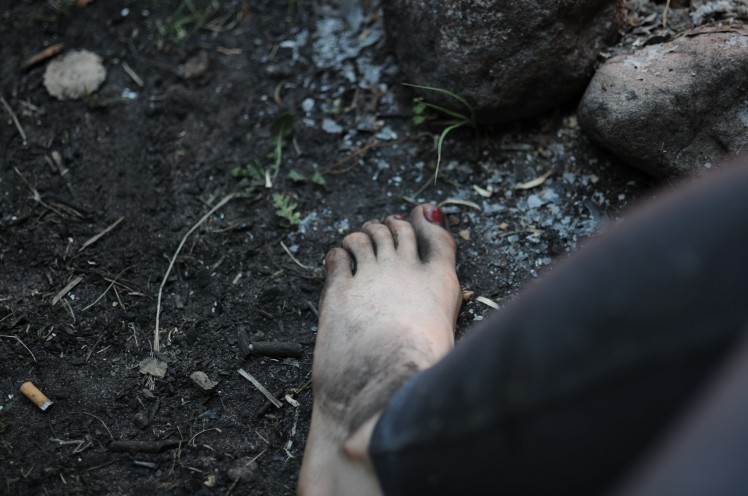 It was the warm, calm sort of pre-summer night where the bugs have not bothered to arrive yet, so I could enjoy a night without a tarp to soak in the fresh air. As night fell and the stars began to peek out between the bits of puffy clouds, I hunkered down into my bivy nest and went to sleep. 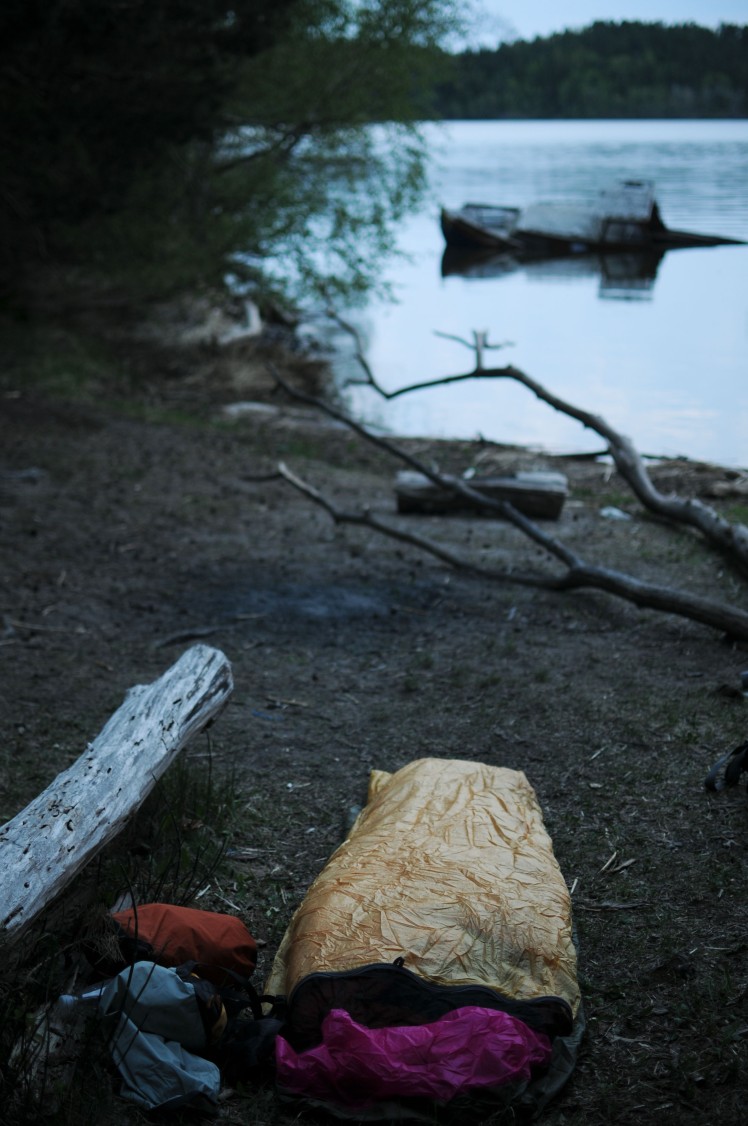 This morning was also clear and warm, so I luxuriated whilst sipping yogurt. Eventually, I saddled up the pony and made my way home.

It was pretty much the perfect escape.

One thought on “I have an extra weekend!: The wilds of Stockholm”

My latest masterpiece - a cozy chunky sweater, just in time for the weather to get warm again! 🤷‍♀️
Found another #emotionalheritage plaque at a picturesque breakup spot #londonlife
Can’t stargaze in London, so have to make my own sky. Which would you pick? #imaginarytravels @bazaart
If I could pick a house based on the front door, I think this is the one I would choose.