Rather than scooting from the conference directly to Cairns, I decided to pop over to Sydney to take a picture of the rather famous opera house and harbour. While I didn’t feel the immediate connection with Sydney as I had with Melbourne, I am so glad I had the chance to explore this vibrant city.

I landed early in the morning and the super helpful lady at the train told me that on Sundays, for $16, you have unlimited rides on public transit (trains, trams, buses AND ferries). This is pretty amazing, considering most places you have to pay a minimum of $15-20 to just get from the airport to the city centre. The train takes about 10 minutes to get to the central station, where I switched to a bus for a few more min. Easy peasy.

I left my bag in the luggage room at my hostel (The Village Broadway, which was accurately represented by the cheap price) and set out immediately exploring what Sydney had to offer.

I headed in the direction of the opera house and Circular Quay (where the various ferries leave from).

I was not disappointed by the sparkling white structure against the blue of the harbour. 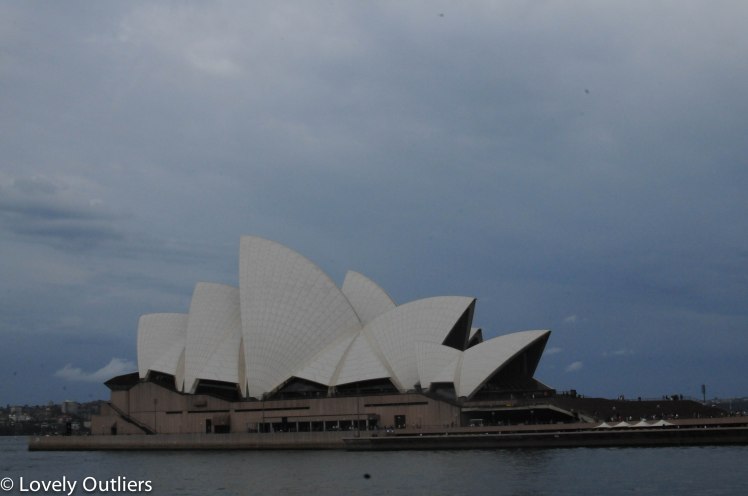 A dozen pics later, I was off.

Knowing it was required to see one of the classic Aussie beaches, I took my friend’s recommendation and headed to Manly beach. The ferry takes about 30 min and was FREE as part of my transit pass for the day.

The short walk from the ferry takes you through a stereotypical beach town, with more ice cream shops than reasonable. And with that, you are on a HUGE white beach, surrounded by the variegated blue-green ocean and extremely tanned, toned humans. 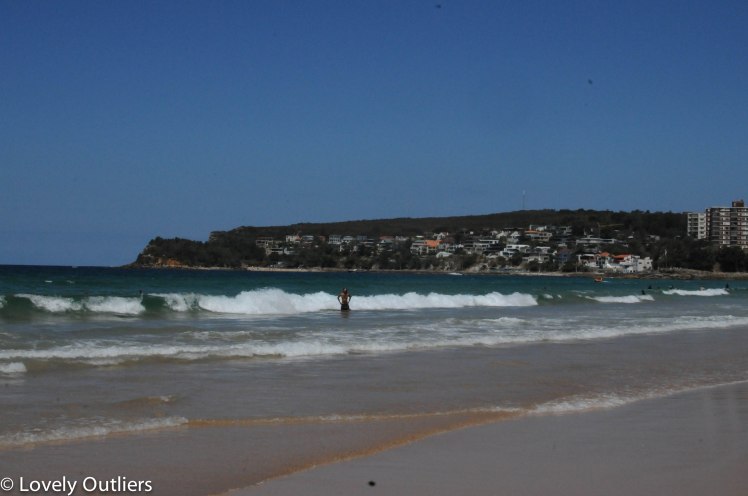 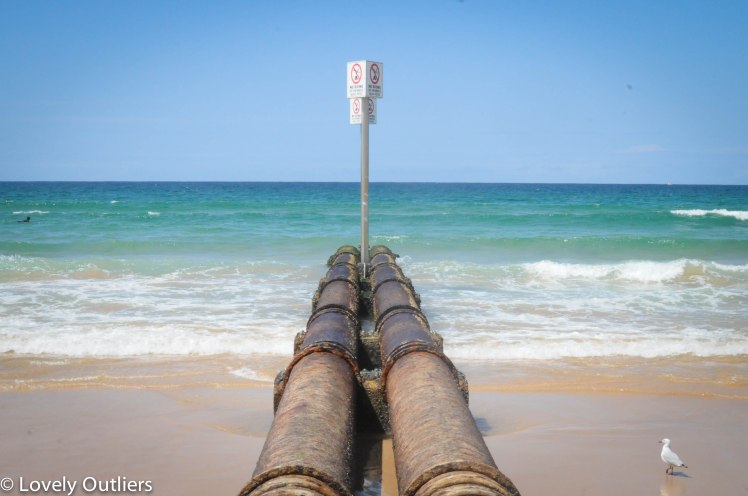 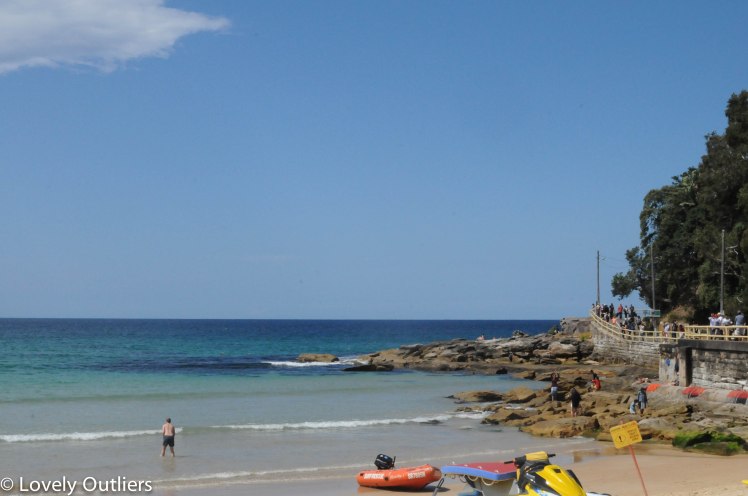 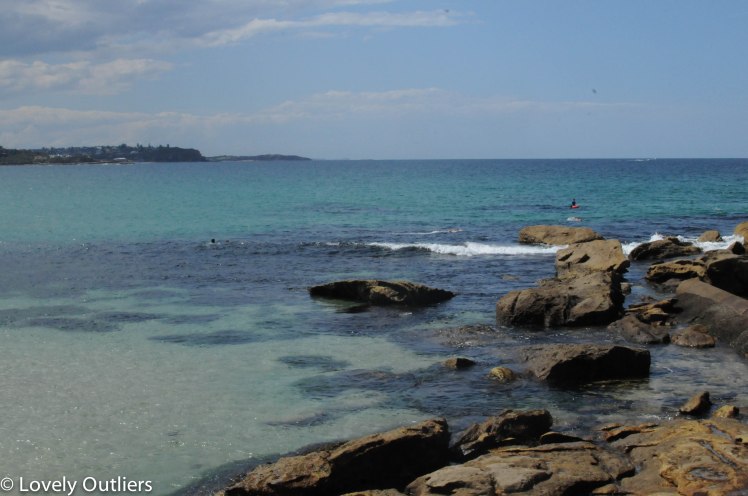 From Manly beach, I took the scenic walkway through bits forest and along the shore towards Cabbage Tree Bay beach and aquatic reserve.

Along the way, I met this guy:

And explored bits of the surrounding town. 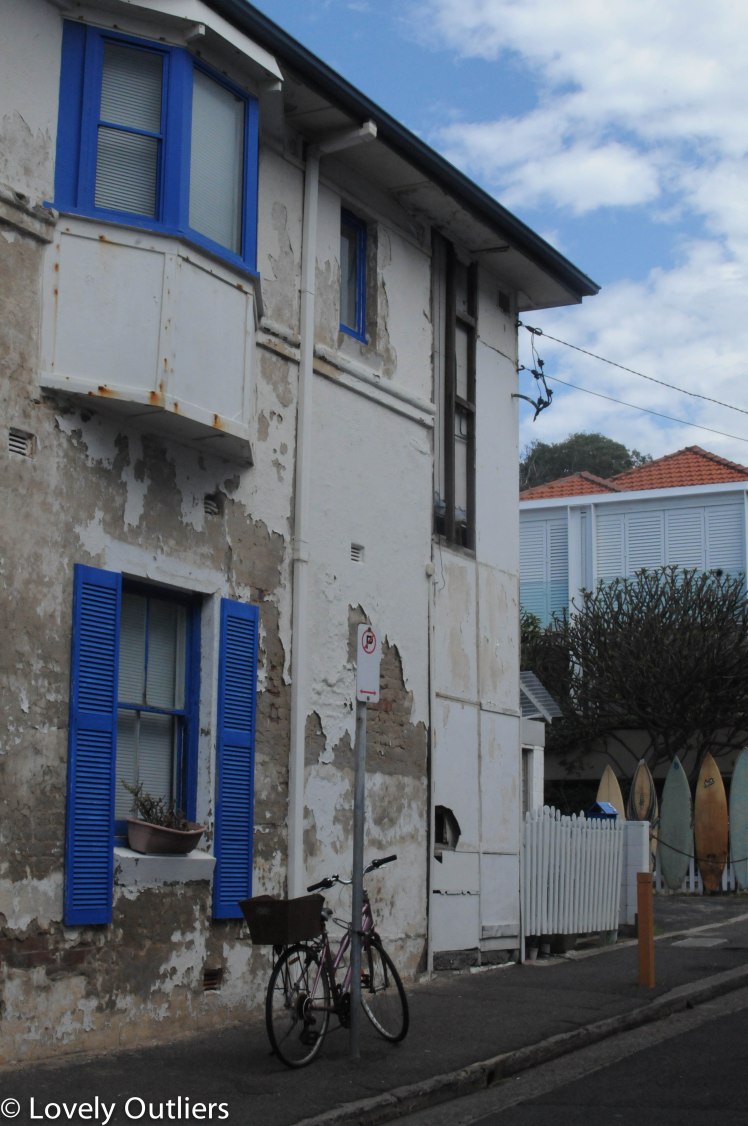 There was one of the most scenic lidos that I have seen abutting the ocean, featuring sculptures of delicately dancing people. 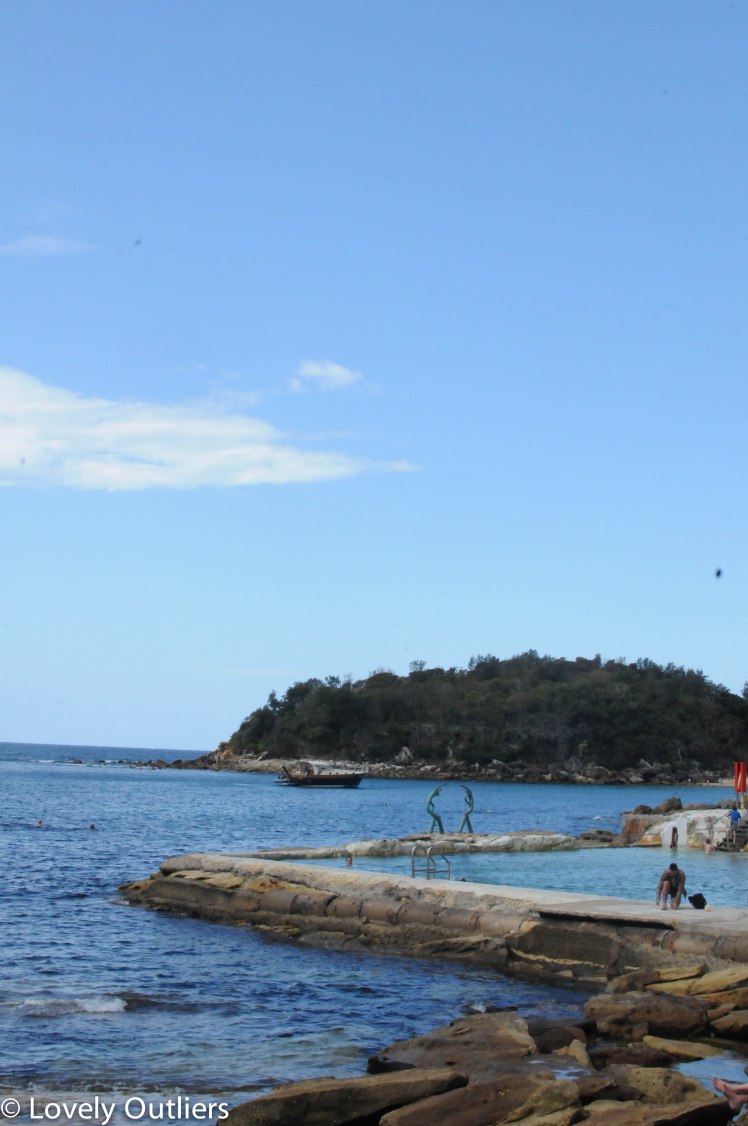 From there, I scrambled up some rocks to get a birds-eye view of the bay. 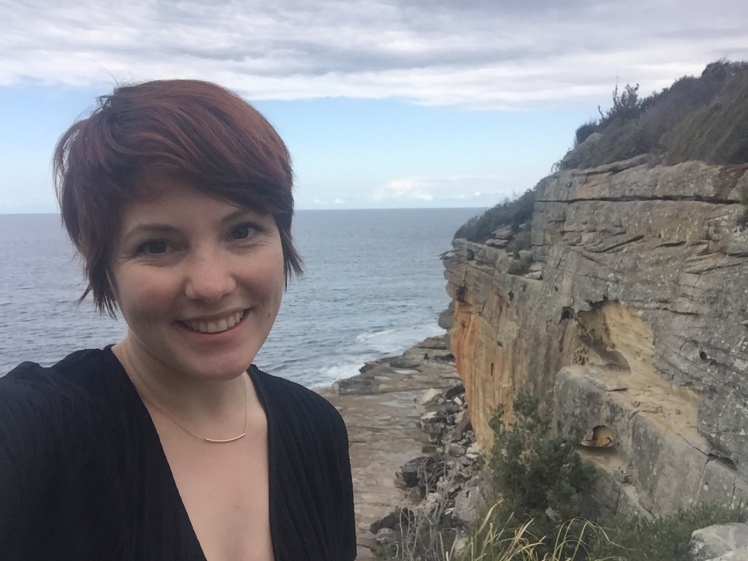 I got caught in the rain on my way back, and was pretty soaked by the time I got to the ferry, although I stubbornly chose an outdoor seat and suffered through the chill for the chance to watch the Sydney harbour re-emerge. 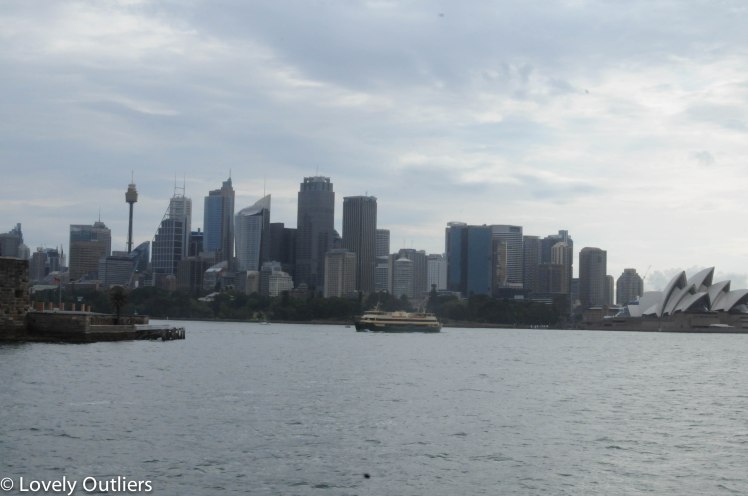 If you are a devout disciple of Oprah, you may be tempted to go for the full Harbour bridge experience – including climbing up along the top of the bridge. I did not shell out the $165 AUD to reach the summit, and since I was doing Sydney on-the-cheap, I figured a meander across the regular pedestrian area would suffice for me. 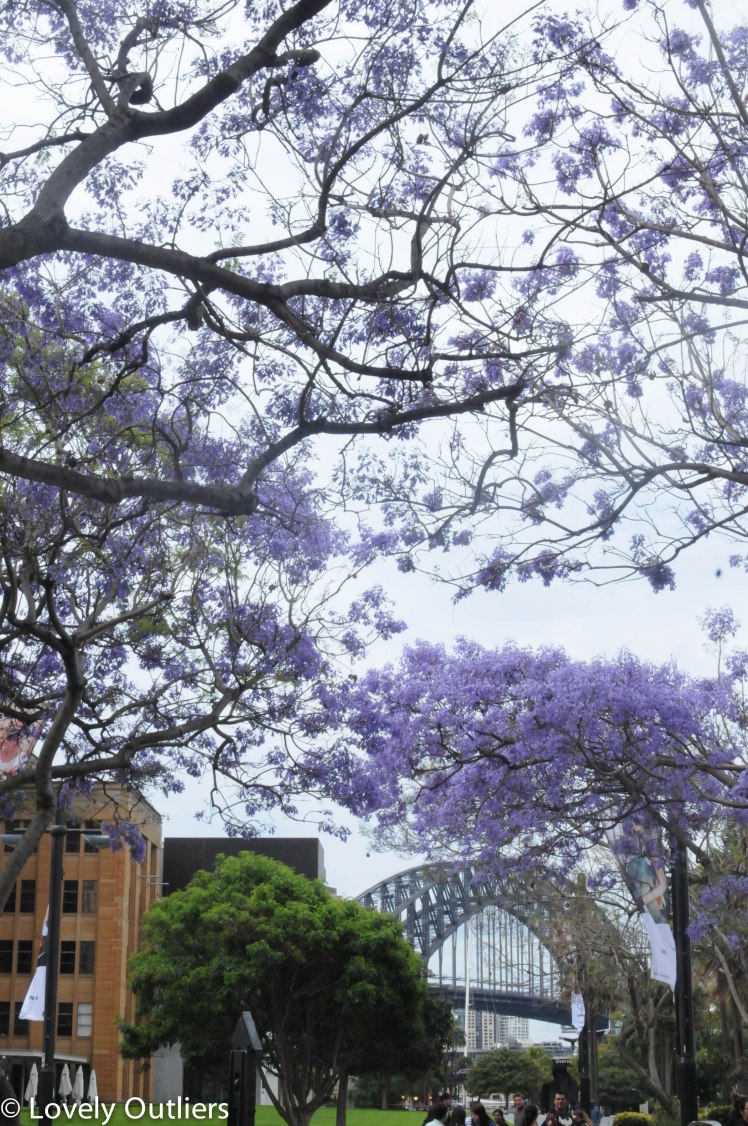 It was a really scenic walk, and it gives you some unique photo opportunities of (you guessed it) the Opera House. 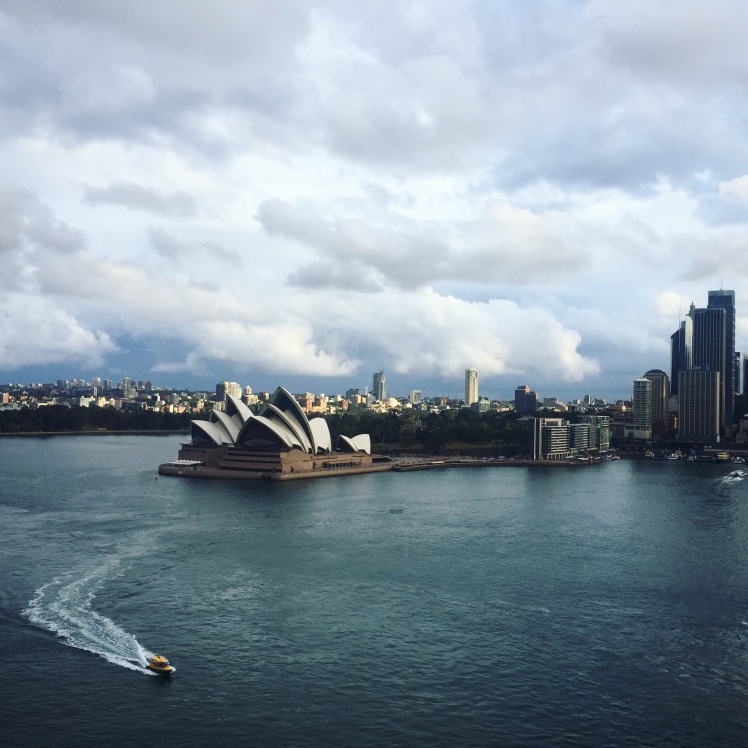 The neighbourhood on the other side of the bridge had some charming bits, which I savoured before grabbing the train back to Circular Quay. 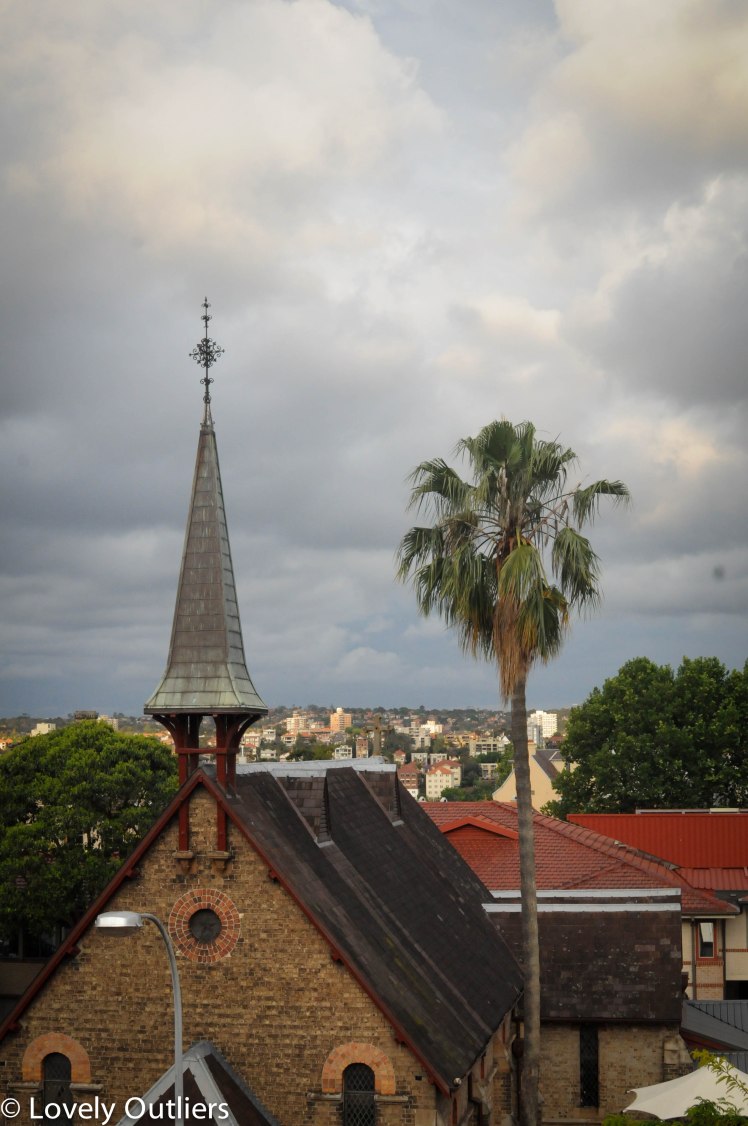 The final stop of my tour was to basically stalk the Harbour area in order to watch the sunset play across the striking white of the Opera House. I ducked into the Botanical gardens for part of this, enjoying the shelter from the rain that the massive trees afforded.

After the spectacular day (and walking nearly 20k around the city), my brief stay at the budget hostel was not great. There were the unmistakable smell of unwashed adolescent boys emanating from the lower bunk, and as soon as I had settled in for the night, a construction crew started literally jackhammering and sawing outside the window, complete with extremely bright floodlights that pierced through the curtain and the closed window panes. Never before have I been so glad to be up at 4:30am to get back to the airport, simply to escape the auditory torture. 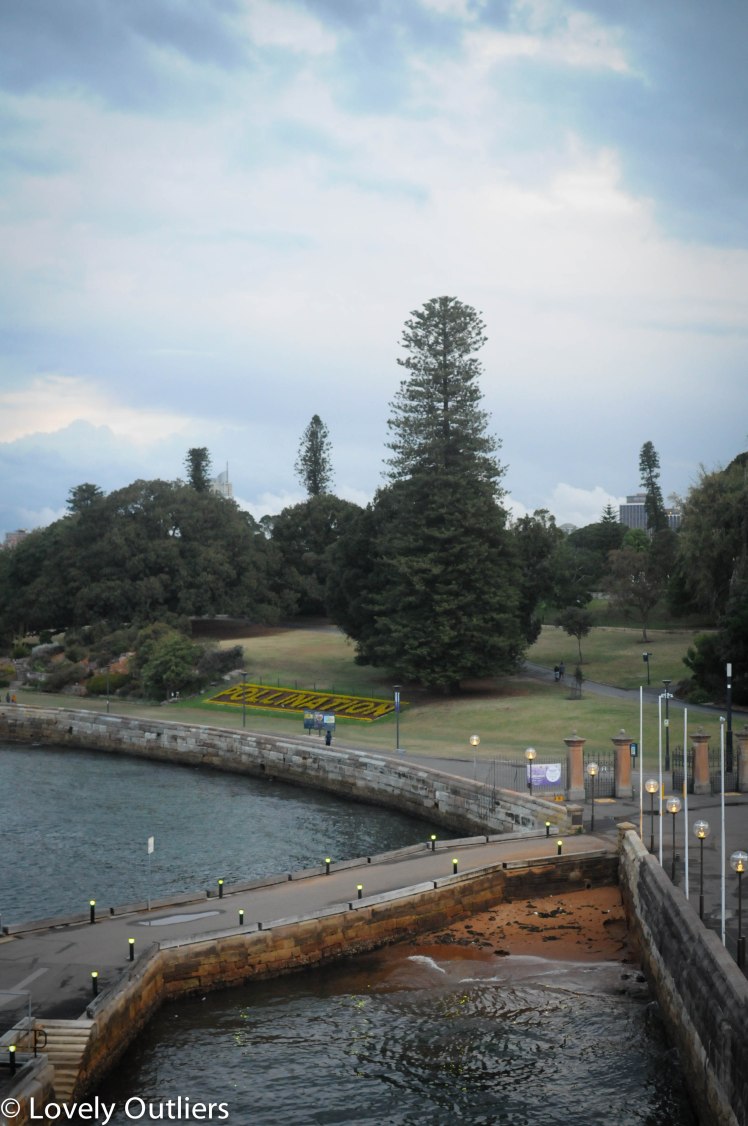 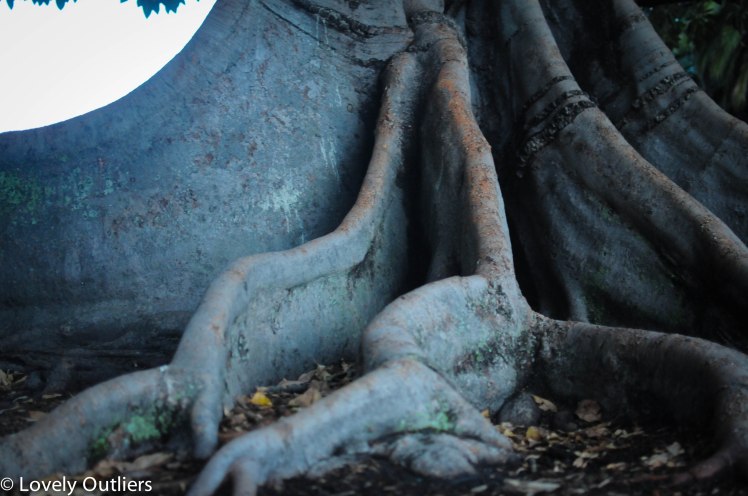 But rather than ending on a slightly sour note ,I am now gonna share an excessive number of pictures of the Opera House, because I was totally captivated! Enjoy! 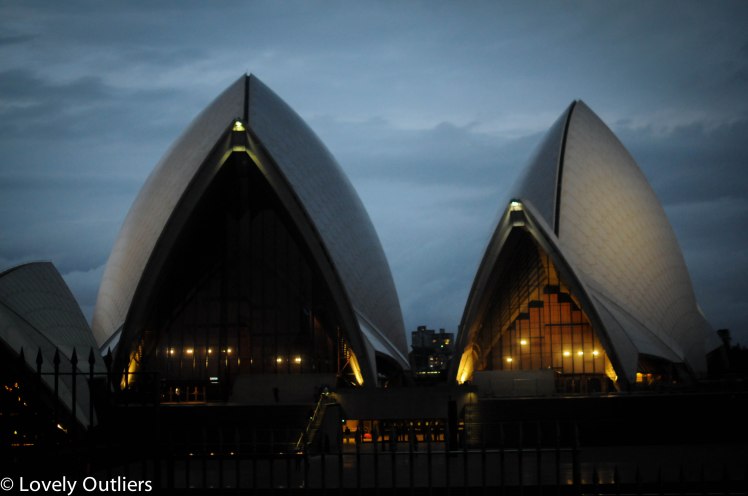 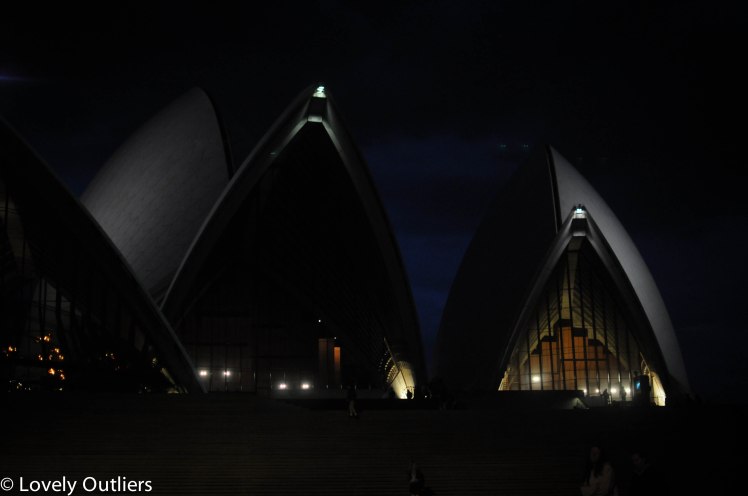 One thought on “A sliver of Sydney: Top 5 stops on a 1-day tour”