From the moment I stepped off the plane and Bangkok walloped every sense with intensity, I knew this would be a place like none I had ever experienced. I had taken the red-eye from London and was rolling into my hostel shortly after 8am. After stashing my bags at my hostel and making a new friend in the lobby, we set off together in search of coffee, food, and adventure.

As we wandered, it became clear that this was not going to be a standard hipster smashed avo on toast sort of breakfast. Most people we saw were eating huge bowls of steaming noodles and broth. We ducked down an alley and were soon inhaling huge bowls of… something. 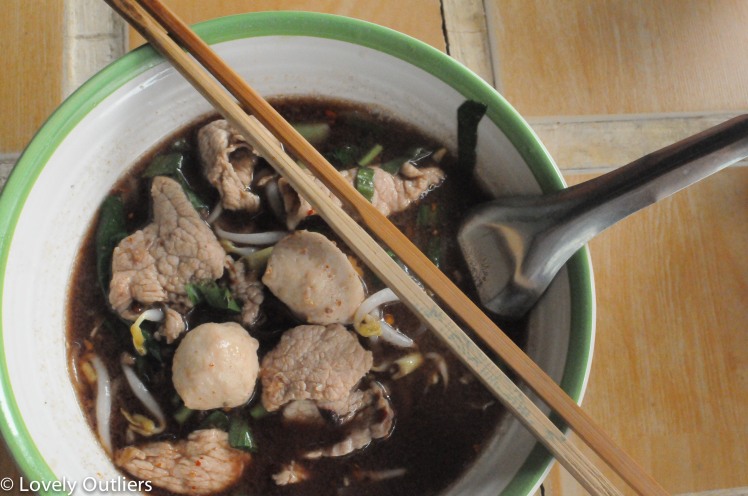 The food was spectacular and our proprietors were incredibly friendly, even if the kitchen facilities were a bit questionable. 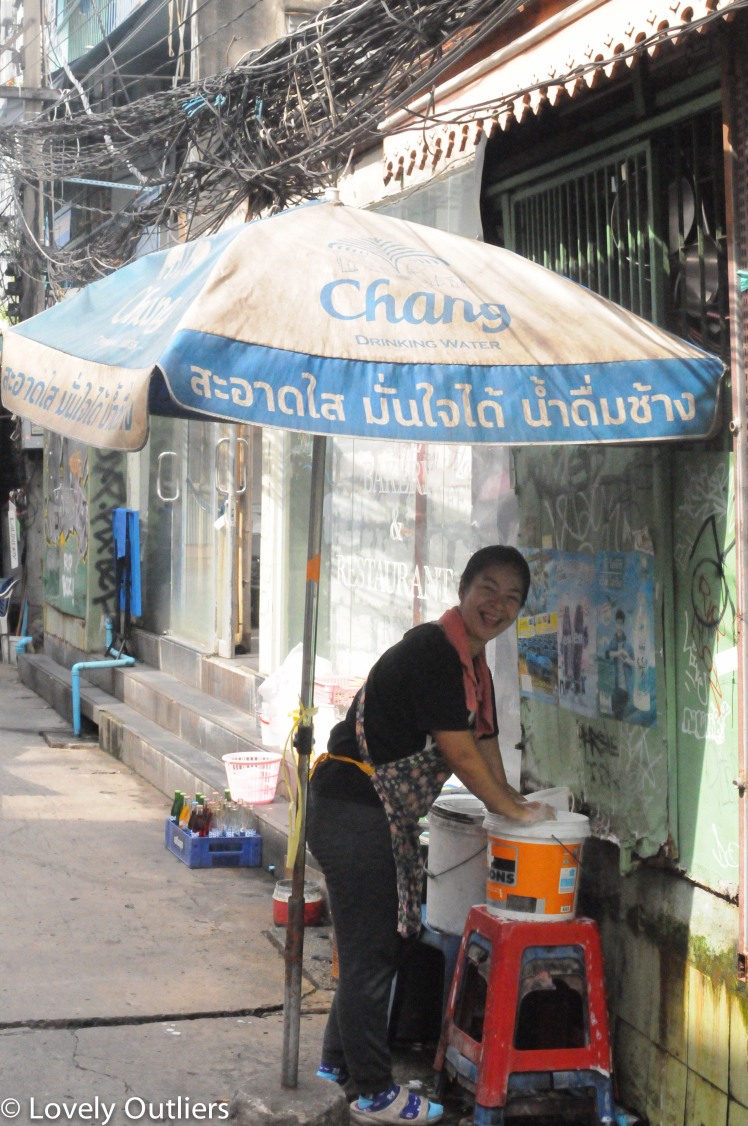 We decided to walk with no particular destination, just soaking in the city. 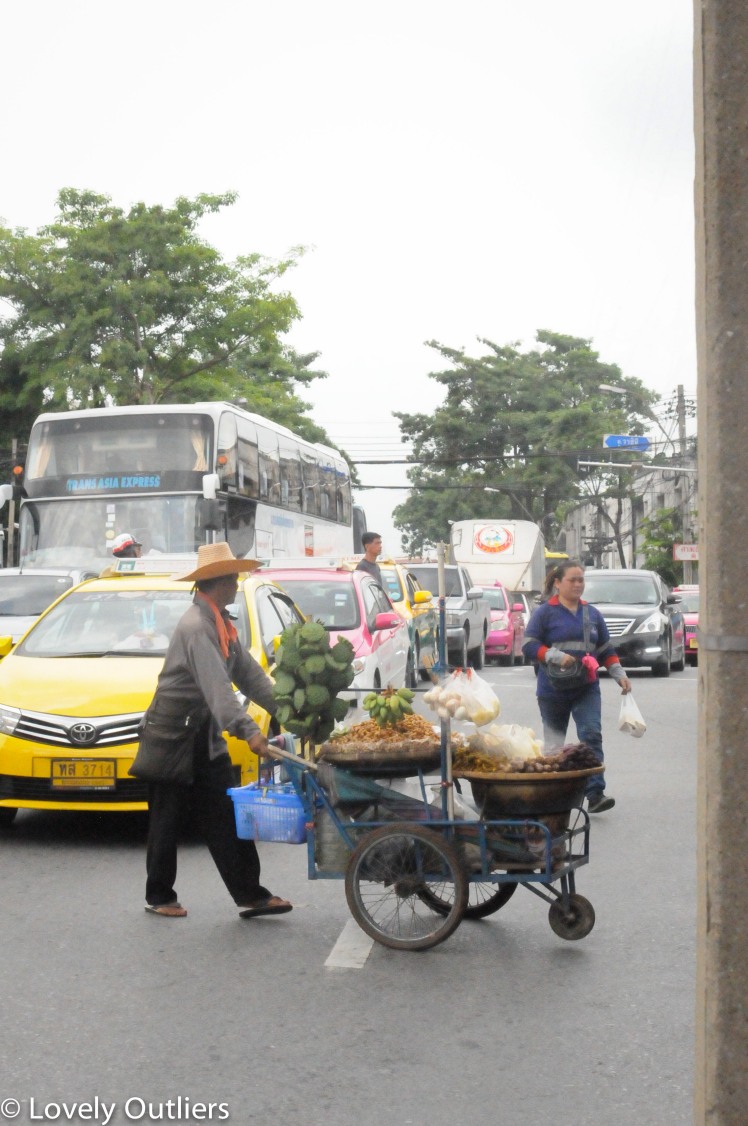 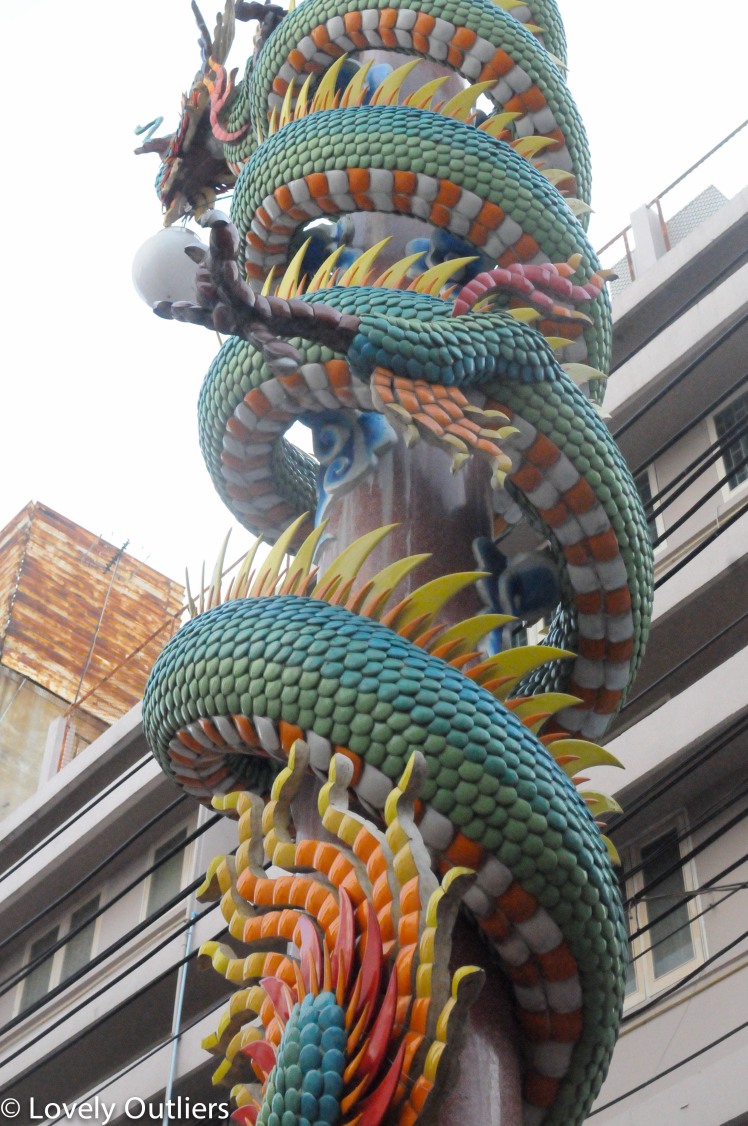 We learned that the city was preparing for a huge memorial celebration for King Bhumibol Adulyadej, who had died one year previous. He was a much beloved monarch, ruling for 70 years and widely regarded as a demigod and the ‘father of all Thai’s.’ On the one hand, it meant that temples were free, but on the other hand, it meant that the next day, no alcohol would be served in the city. The following day, the streets were lined with people in black holding large wreaths of marigolds for the cremation ceremony.

At the advice of a super friendly police man, we hired a tuktuk driver for the afternoon to take us to the temples. 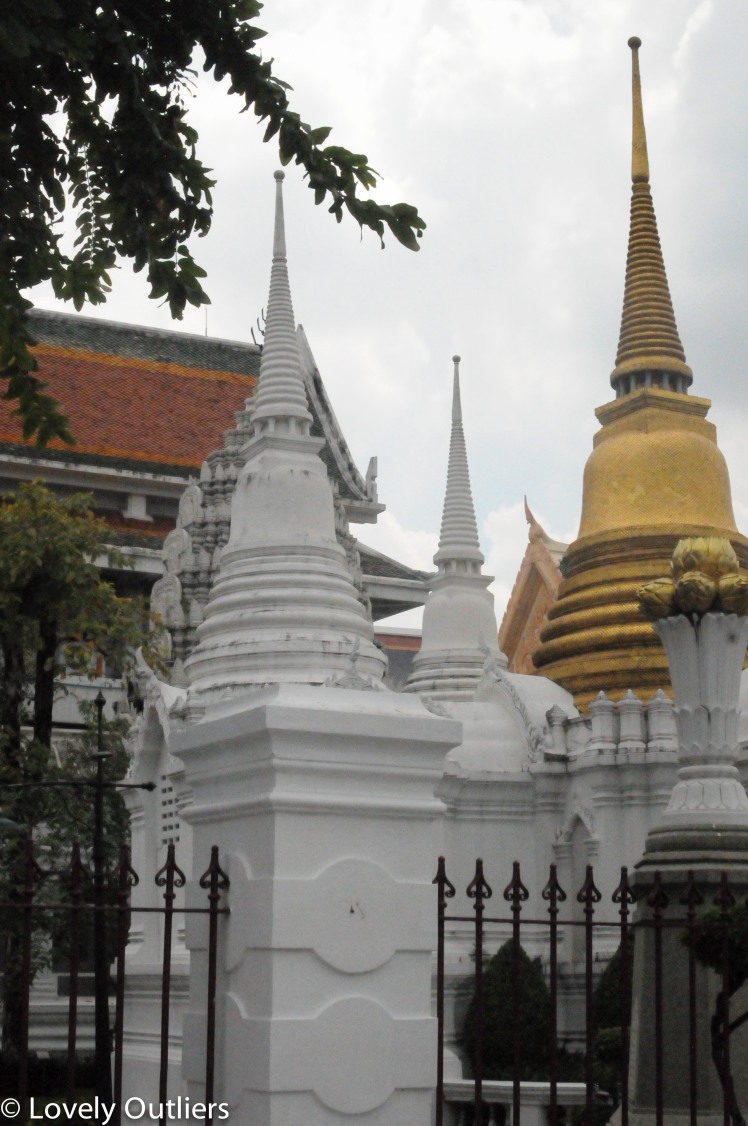 The Standing Buddha statue is 32 meters of gold! 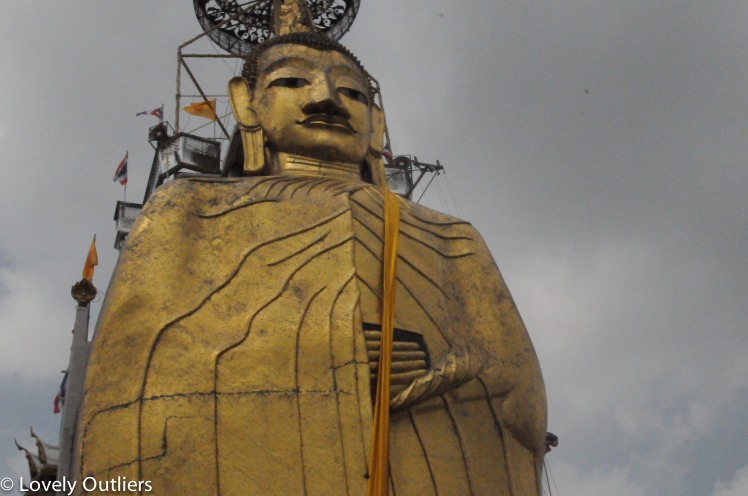 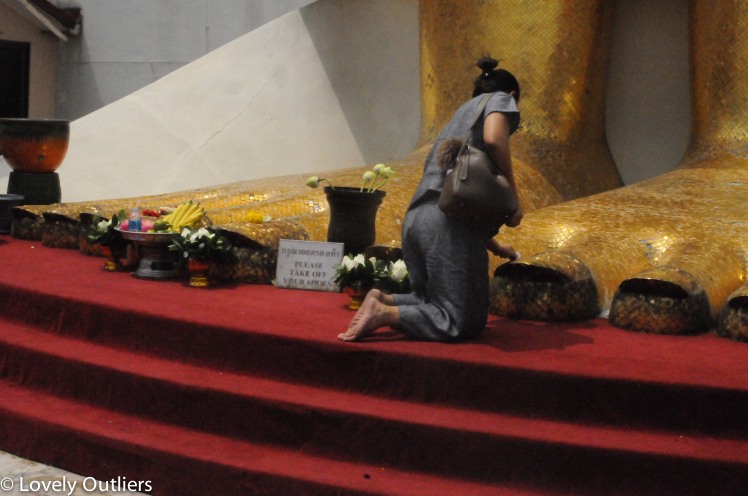 It is surrounded by smaller temple structures and art. 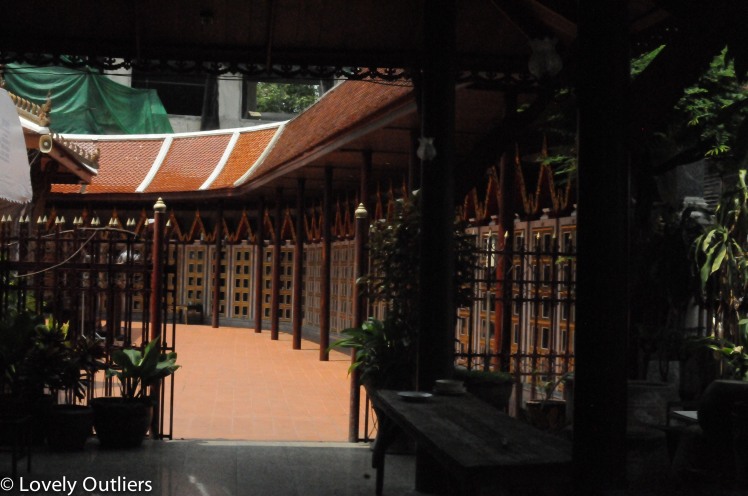 This iconic temple flanks the side of the Chao Phraya river. I didn’t get a chance to peak inside, but I did marvel at it as I cruised up and down the river. 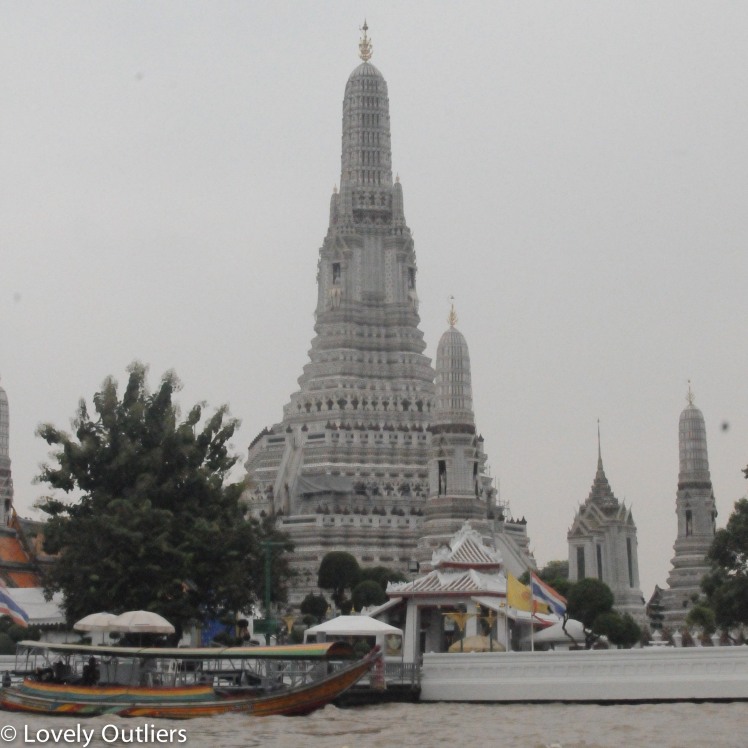 The contrast between these spectacular displays of opulence and the surrounding housing which often is in disrepair, small, and crowded. As a visitor, inequality is evident everywhere you look, with houses which appear to be collapsing into the canal beside meticulously cared for temples. The contrast was further demonstrated when Gemma and I headed to a rooftop bar in the business district, which is filled with glittering skyscrapers and dripping with displays of wealth. The moral and ethical dilemmas that dramatic inequality presents is something I continue to grapple with and I have not reached a satisfactory conclusion about how I can best use my privilege to do good, or at the very least, not continue to reinforce patterns of entrenched poverty. This is a question I continue to struggle with, while being deeply grateful for the opportunity to wander these streets and get an understanding of how people live.

As I recounted in my earlier post, the transit on my arrival to Bangkok was pretty exhilarating and dangerously on the edge. Our return trip to the airport was unexpectedly eventful. The previous night’s rain had flooded much of central Bangkok, including Khao San road. The minibus we had booked was not able to navigate many of the streets, and instead, there was a bare-footed man on a motorbike, driving through half-a-foot of water to pick up people from their lodgings to bring them to the van. 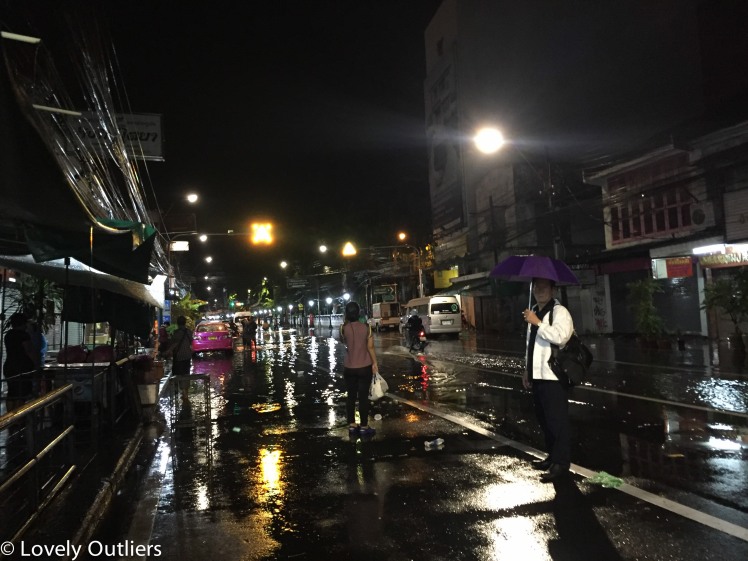 These travel delays had Gemma and I gnawing our nails, as it looked like we might miss our flight, particularly with further delays at the airport. But we made it in the nick of time and with our bellies full of the best food, we bid farewell to this surprising and charming city.

2 thoughts on “The flavour of contrast: Bangkok”

Our bikes are riding smooth as butter and are gleaming after a day of pampering in the Lunar Cycle spa. ❤️💙
Things I have learned this year:
Pretty colours for my bike glamour shot
For a moment, I forgot I was in England. Strong Dutch vibes here! 😍⁠