After luxuriating in the Blue Lagoon, Emma and I took to the road, crossing the starkly beautiful Icelandic landscapes in the direction of the ferry. 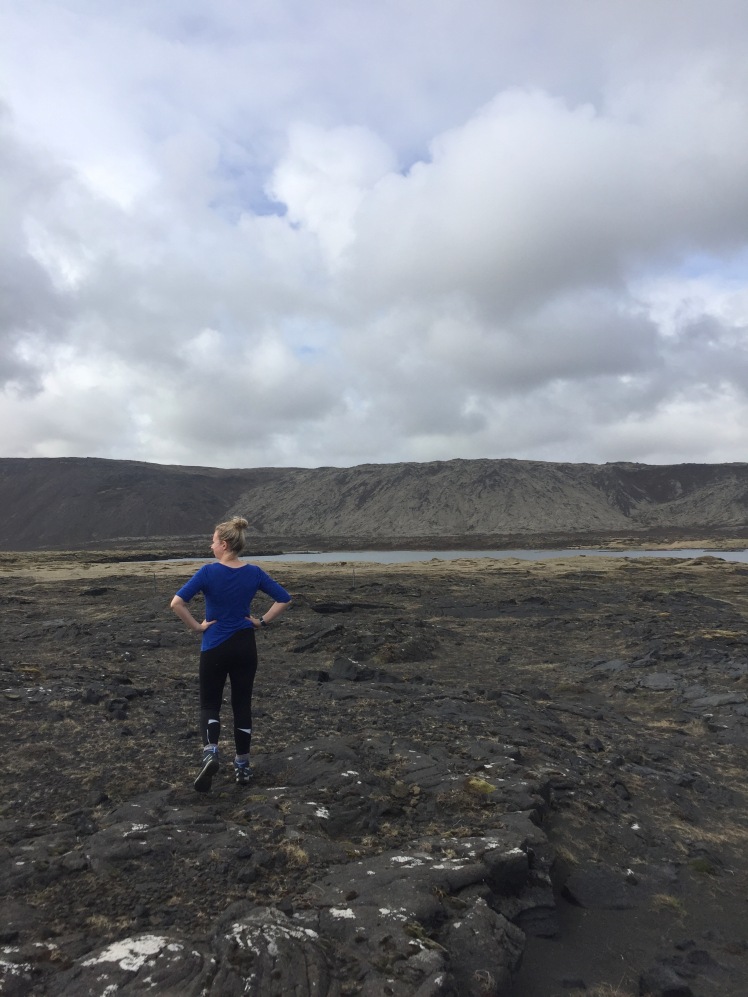 We arrived with plenty of time before the ferry departure, so we took a moment to enjoy the enchanting view of a black sand beach. 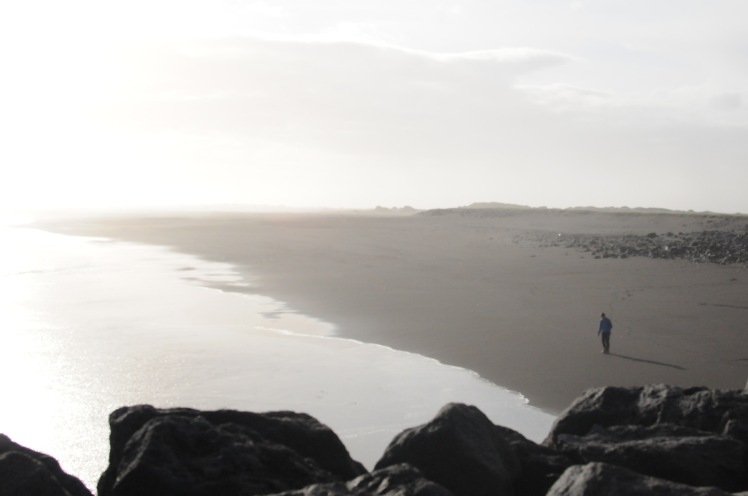 This was a moment of bliss before the sh*t hit the fan, and we realized the ferry had been rescheduled to leave from a port 1.5 hours away, and thus we solidly missed the ferry. This apparently is a regular occurrence – the combination of high winds and a shallow port means services get regularly cancelled.

Realizing we were an impassible bit of water away from the accomodations we had booked, we found a guesthouse and collapsed into bed. The next morning, we refreshed the ferry site umpteen times to ensure we were heading to the correct port. I have never been so happy to sit on a ferry and watch the mainland receed from view. We were back on track!

Vestmannyar is a collection of islands off the south coast of Iceland. It’s largest island Heimaey is home to a few thousand people and (as discussed in my previous post) a few thousand puffins.

These islands owe their existence to submarine volcanic eruptions, but also one of the defining moments in recent history was the eruption Eldfell in 1973, which destroyed 400 homes and covered the entire island with volcanic ash.

(above photo from Eldheimar gallery) 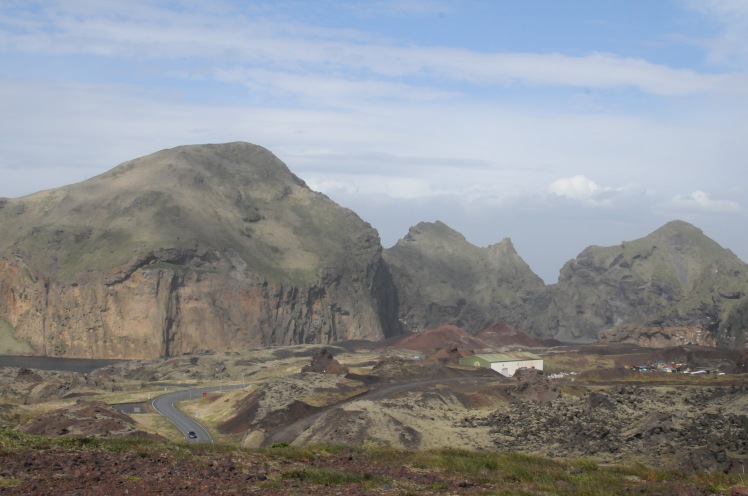 By the time the eruption was finished, 6 months later, the surface area of Heimaey increased by 25%, creating surreal lava fields that feel prehistoric, but have only existed for 35 years.

A museum, Eldheimar, was opened to remember the eruption. 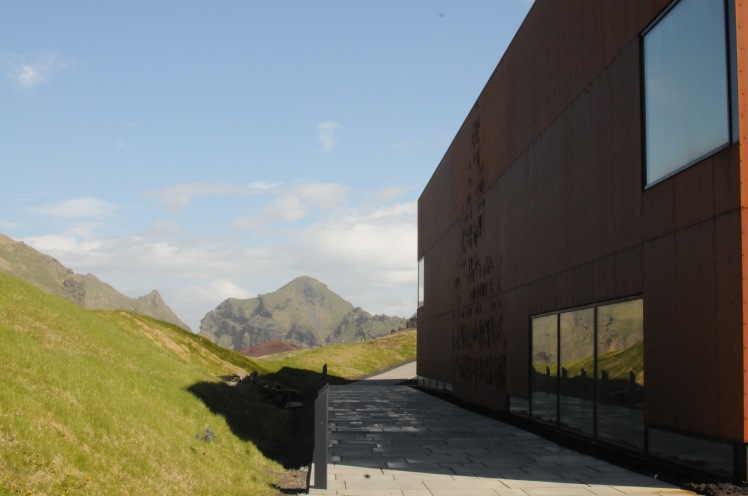 The museum is build around excavated remains of a few of the houses that were destroyed by the eruption. You can see the deserted belongings laying where they were left in January of 73. It sounds morose, but it is an oddly beautiful museum.

After touring the museum, we hiked through the volcanic ash field and up part of the volcano. 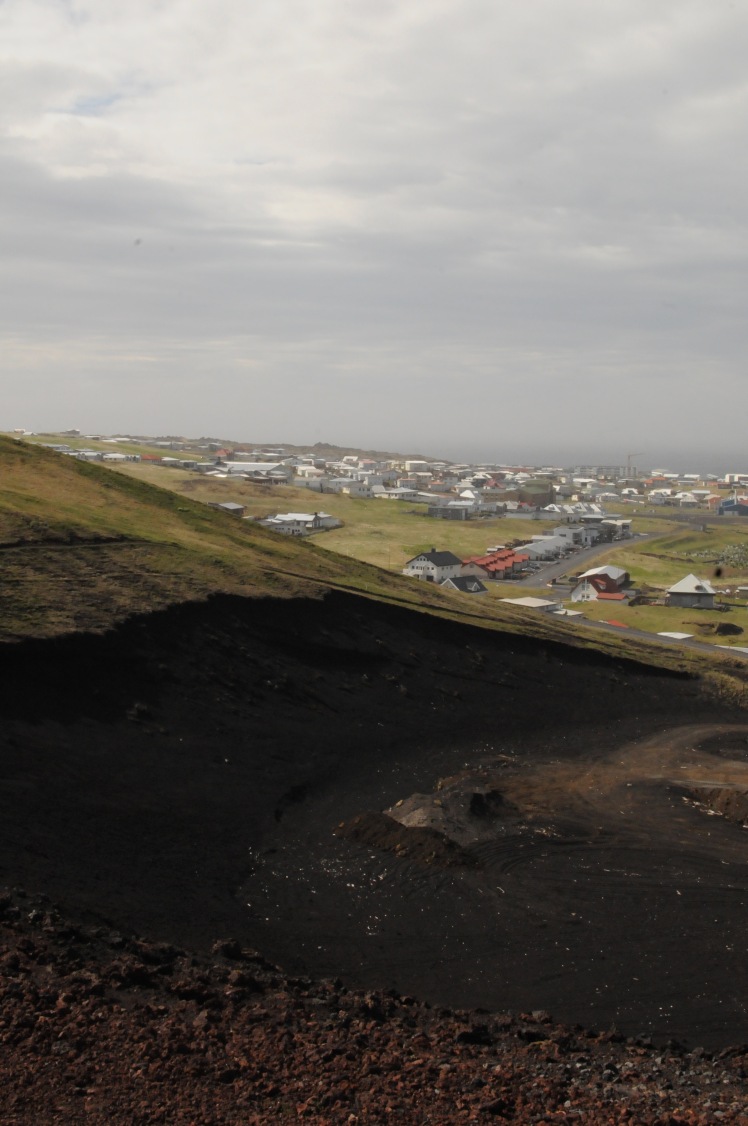 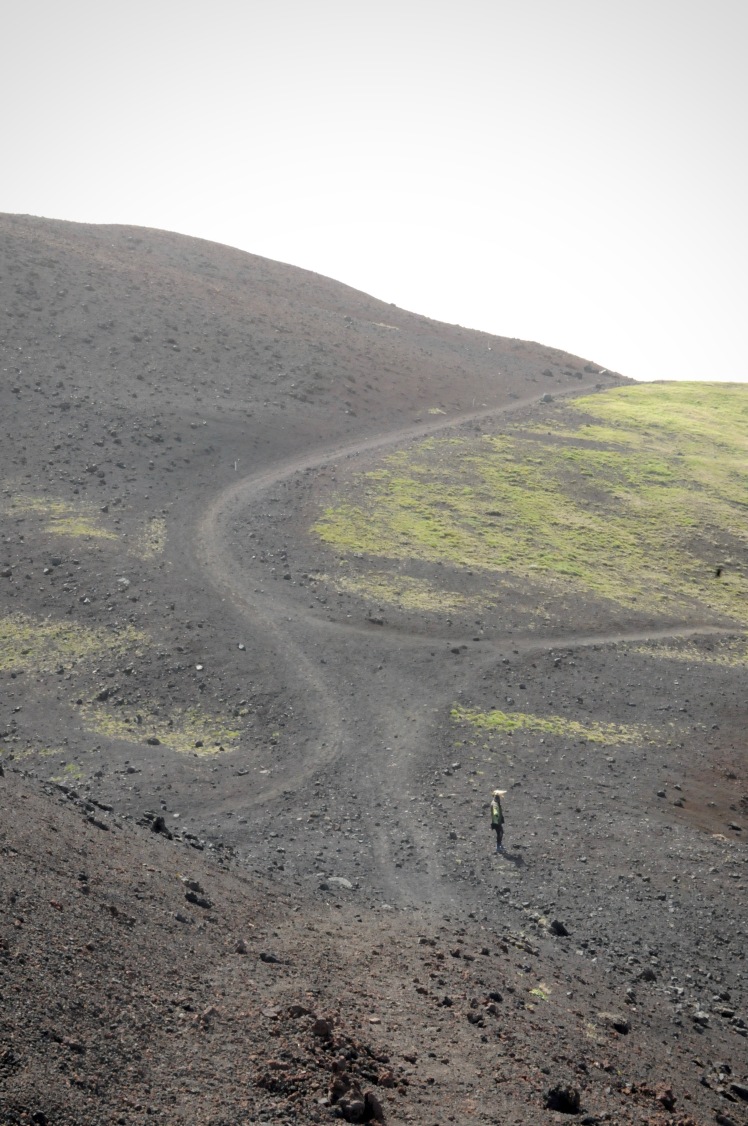 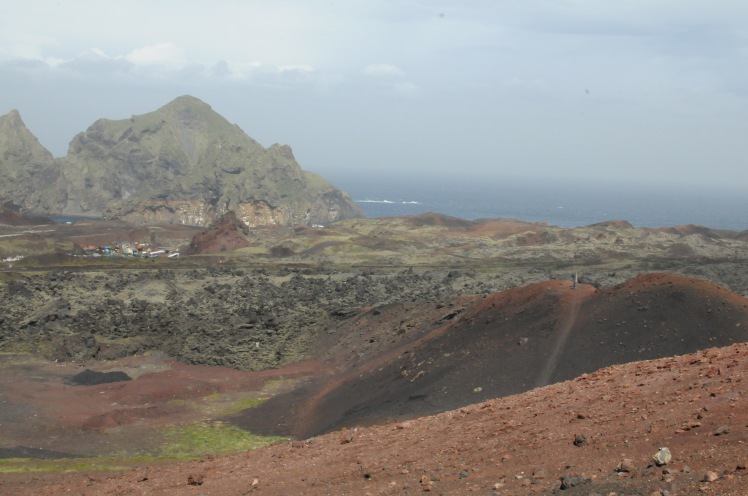 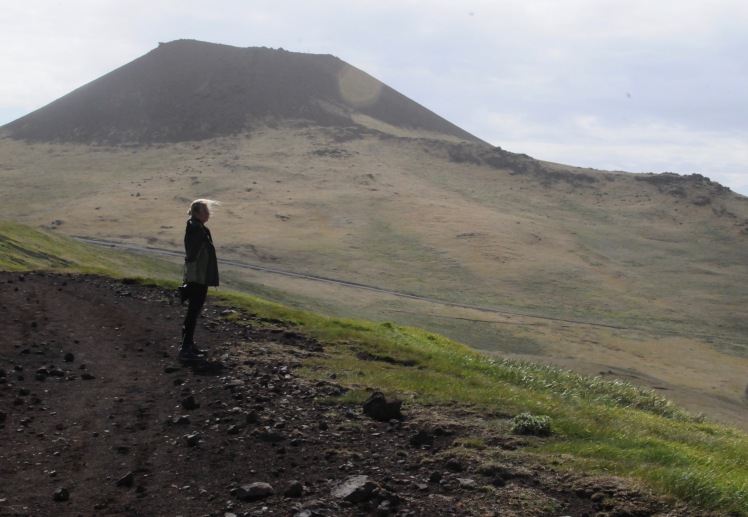 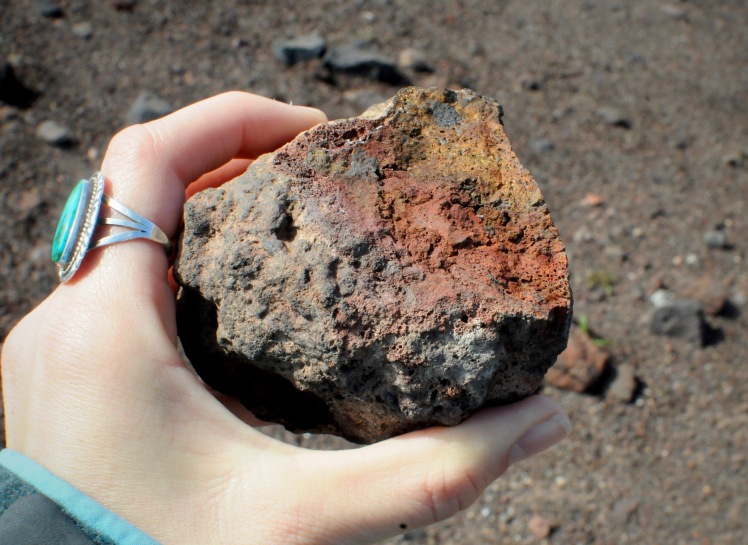 It was tremendously windy! 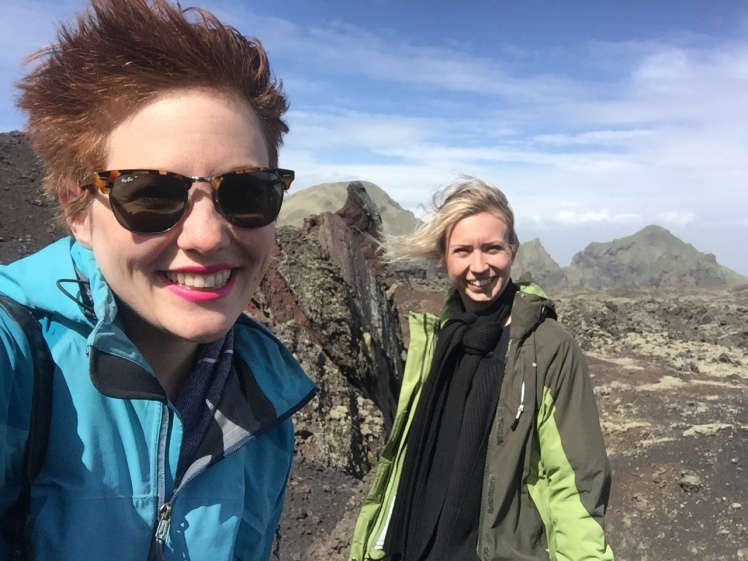 The wind could hold you upright if you leaned back! 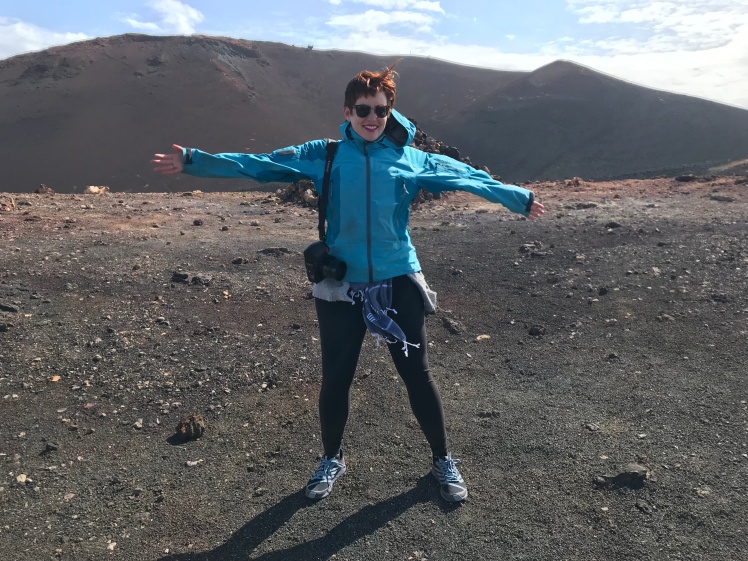 We decided not to continue up, for fear of being blown off the volcano, even though that would make a very dramatic vacation story. 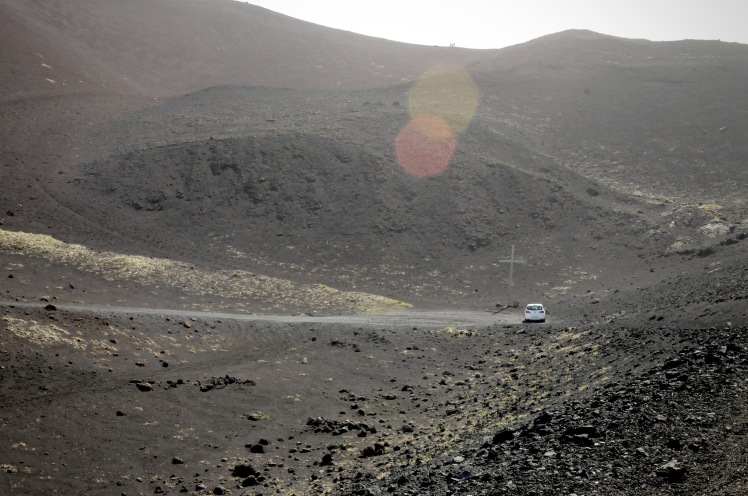 Our ferry struggles weren’t over, it turned out. After a marvellous day of exploration, we were sipping coffee over dinner, spending the remaining time before our ferry left at 9:30pm when we learned that the ferry might be cancelled, and it was the last of the day. We spent the next hour biting our nails, anxiously waiting to hear if the ferry would be running.

We were again on the wrong side of the water and would not be making it to our Airbnb. There was also a real risk that if we didn’t make it onto the (fully booked) first ferry the next day, Emma would miss her flight.

We were actually stranded on the volcano island!

There wasn’t much we could do but watch puffins, drink wine, pay for double accommodations (again), and keep our fingers crossed that we would be sailing at first light (or 8am). Astonishingly, we made it off the waiting list! Once again, the moment that I drove  our little car into the belly of the boat was a moment of pure joy.

This island was unlike anything I have explored. The landscape is jarring and beautiful. The wind is fierce, and the unpredictability of ferries contributed to a volatile experience of the island – with dramatic emotional highs and lows to mirror the landscape.

One thought on “Volcanos of Vestmannaeyjar”

A majestic Nelson staircase at Somerset House. #architecture #mylondon #blackandwhite #neverstopexploring #prettylittlelondon
London is a completely different city when viewed from this perspective. Another wet, cold, and exciting adventure on the foreshore of the Thames. #mylondon #mudlarking #treasurehunting
I think all architects should consider incorporating giant slides into their design! #tubeslide #arcelormittal #architecture #mylondon #blackandwhite
Sometimes there are elaborate balloon displays to spice up a standard doorway! #mylondon

Australian Traveller that loves to "Roam" our globe, creator of ENDLESSROAMING.COM sharing the experience through word and photography. Currently residing in my home of Newtown Sydney but hope to be back on the road late 2020. Feedback / questions are more than welcome, happy travels

Education and support for parents with neurodiverse children

Tales of inspiring wave riders. Consciously aware of our world.